Joe Wolfenden, of the Quasar Group and the University of Liverpool, and Bill Kyle, of the University of Manchester, have recently returned from an extremely successful measurement program at the MAX IV synchrotron in Lund, Sweden.

Their measurements were actually a special type of imaging, just as anyone else would do with a digital camera. However, the average digital camera captures optical light with a wavelength around 0.5 micrometres, whereas Joe and Bill were looking at much longer wavelengths; up to 3000 micrometres! This light was made by an electron beam, by either hitting a target or bending its path with a magnet. It is known as coherent radiation, because its wavelength is comparable in length to the length of the electron beam that produced it. 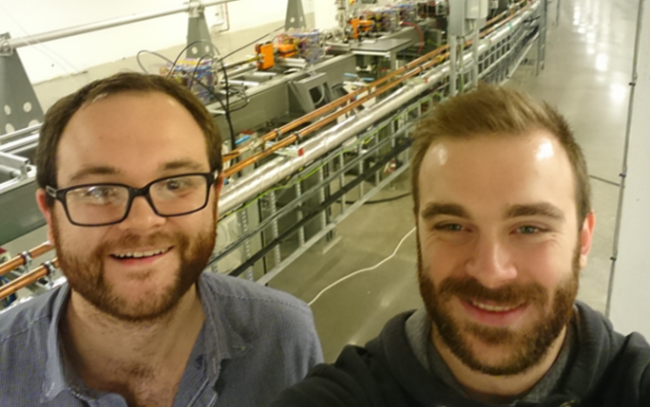 Joe and Bill were imaging this coherent radiation to show that it was possible to tell how long the electron beam was from the properties of the image they found. Happily their measurements went extremely well! They are currently analysing the data, but things are looking very promising and they are already planning to head back to MAX IV for more measurements in early 2019!

They had a fantastic time in Lund and want to say a massive thank you to Erik Mansten and Sara Thorin from MAX IV for all their help and enthusiasm, and for inviting them in the first place! And also a massive thank you to Tom Pacey, who put in a lot of work helping Joe and Bill prepare for these measurements but was unable to travel with them due to prior commitments (and without a certain late night Labview related phone call none of the measurements would have been possible!).