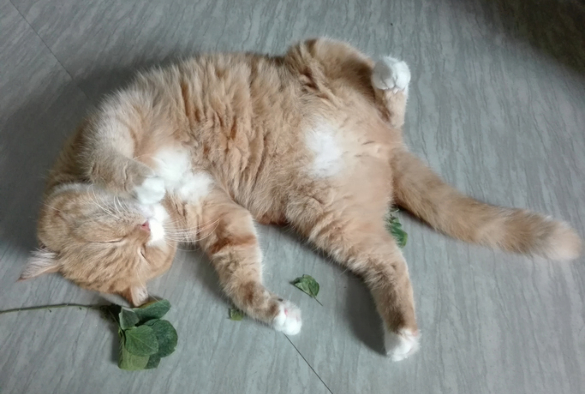 Catnip gives cats more than just a sense of euphoria - it also helps them to repel mosquitoes, a new study involving Liverpool researchers has found.

Both catnip (Nepeta cataria) and the even more potent silver vine (Actinidia polygama) are known to elicit euphoric responses in cats. Cat lovers use dry leaves of these plants and toys stuffed with the leaves to give joy to their pets, who will rub their faces and heads against the plants and roll on the ground.

Speaking to BBC Inside Science about the research, co-author Professor Jane Hurst, Head of the Mammalian Behaviour and Evolution group at Liverpool, explained: “It’s quite interesting because we’ve known about this behaviour in cats for many years and it’s always been assumed that this is just a sort of euphoric response – the animals look as though they are really enjoying it – but nobody has really suggested a potential function and yet this behaviour has been retained across so many different cat species.”

Published in Science Advances, the study by researchers from Iwate University, Nagoya University, Kyoto University and the University of Liverpool found that this behaviour has a practical purpose as well as being pleasurable.

The researchers first identified nepetalactol as the active ingredient in silver vine that induces the characteristic behaviour in cats and went on to show that this reaction is regulated by their opioid system.

“What the team have shown is that when the cats detect these chemicals through their olfactory system it actually stimulates their μ-opioid receptors and increases their β-endorphin levels, so they really do have a chemical stimulation of pleasure,” said Professor Hurst.

Based on previous reports linking nepetalactone from catnip with mosquito repellent activity, the researchers hypothesised that nepetalactol from silver vine would have similar repellent activity and the ‘rubbing and rolling’ response allows cats to transfer nepetalactol onto their fur to protect against mosquitoes. They found that cats with fur covered in nepetalactol after rubbing on silver vine leaves or when annointed artificially attracted significantly fewer mosquitoes than an untreated control group.

“From these results, we found that the cats' reaction to silver vine is chemical defence against mosquitoes, and perhaps against viruses and parasitic insects. This was the most significant finding of our study," said Professor Masao Miyazaki from Iwate University, who led the research project.

“Why is this reaction limited to cats? Why don't non-feline animals react to the plant? To find answers, we want to identify the gene responsible for the reaction. The findings of this study may be used in various applications, including development of new mosquito repellent products," he added.