Júlia Tena Vidal graduated from the University of Barcelona in 2016, with specialization on “Fundamental Physics”. During the undergraduate studies, she collaborated in the research project Entropic Electrokinetics: different diffusion coefficients, with the Barcelona’s Statistical Physics Group in order to study the evolution of the ion’s charge and density in confined geometries, presenting the results at the European Summer School in Strasbourg for Physics of living matter. Júlia’s bacherlor project, Nanoparticles magnetization switching by Surface Acoustic Waves,  was focused on prediction of spin-phonon interaction in magnetic nanoparticle samples, with the Condensed Matter Physics.

She did an Interuniversitary’s Master in Nuclear Physics at the University of Seville, University of Madrid, University of Salamanca and University of Barcelona, with particular focus on Hadronic Physics. Her MSci project, Λ b → J/ψφΛ decay and search for exotic hadrons, was focused on studying a particular Λ_b decay that could lead to the observation of several exotic hadrons, predicting the observation of a new pentaquark. This work has been presented in several conferences, such as the XVII International Conference on Hadron Spectroscopy and Structure in Salamanca, the International Conference for Physics students, or at the Max-Planck-Institute for Plasma Physics during the JDPG-Seminar on plasma physics in Greifswald.

Júlia joined the VALOR neutrino fit group in October 2017 as a PhD student in the LIVDAT CDT. Her project, Physics Simulations to Underpin Discoveries in the Neutrino Sector, will involve further further development of the GENIE global analysis of neutrino scattering data and will enable the deployment of improved comprehensive simulations, the careful data-driven characterization of simulation uncertainties and the new GENIE global tunes will be tested exhaustively against SBND data.

Physics Simulations to Underpin Discoveries in the Neutrino Sector 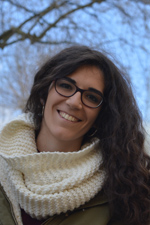