Eloisa achieved her bachelor degree in Physics at the University of Rome “La Sapienza” in 2015.

In January 2018, she obtained a Master Degree in Nuclear and Subnuclear Physics at the University of Rome “La Sapienza” with a thesis about the differential cross section of the Higgs decay in function of the couplings between the Higgs boson itself and the vector boson Z at the ATLAS experiment.

Her PhD research will be focused on searching for the invisible decay of the Higgs boson, analysing data taken by the ATLAS experiment from the years 2015-2018.

If dark matter has less than half of the Higgs mass it might be expected that the Higgs boson would decay to dark matter. Higgs to invisible searches are one of the best ways to discover dark matter at lower masses. 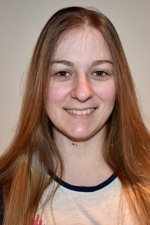