Nathalie Lecesne studied physics at the University Paris XI in Orsay and at the University of Caen. She graduated in Nuclear Physics in 1994 and completed her PhD thesis in 1997 at the GANIL laboratory, in Caen, on target and ion source development for the production of condensable radioactive ion beams. She co-authored the patent submitted for the development of a new concept of ECR ion source during her thesis. She then moved to the Argonne National Laboratory (USA) for a post-doctoral position to study the production of radioactive fluorine ions.

In 1998, she entered the CNRS at the GANIL laboratory in Caen to work on the development and production of radioactive ions at the SPIRAL1 (Système de Production d’Ions Radioactifs Accélérés en Ligne) facility. She was the GANIL coordinator for the European RDT project TARGISOL (TARGet for Isotope Separator On-Line). In 2005 and 2006, she spent 16 months at the TRIUMF laboratory in Vancouver (Canada) as a visiting scientist where she developed a new ECR ion source and worked on the TRILIS Resonant Ionization Laser Ion Source of TRIUMF. Back in GANIL, she initiated the project of developing the first Resonant Ionization Laser Ion Source RILIS of GANIL and she currently holds an ANR grant for the GISELE project (Ganil Ion Source using Electron Laser Excitation). 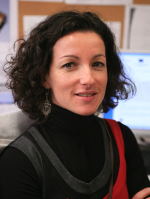