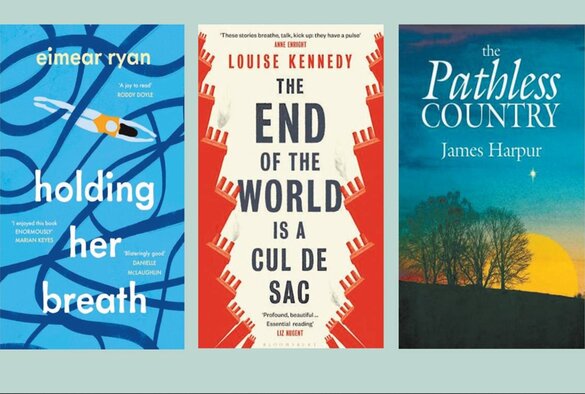 The University of Liverpool’s Institute of Irish Studies announced the shortlist for the third John McGahern Annual Book Prize, carrying a prize of £5,000, for the best debut novel or short story collection by an Irish writer or writer resident in Ireland in the year 2021.

Twenty-four entries were received, an increase of 50 per cent on last year.

Now in its third year, the prize for best debut book published in 2019 went to Adrian Duncan’s Love Notes from a German Building Site (The Lilliput Press) and for 2020 to Hilary Fannin’s The Weight of Love (Doubleday).

Both writers continue to prosper and build on these striking fictional starts, with Fannin named an Arts Council-TCD Irish Writer Fellow 2022 and Duncan going on to publish prolifically with a further two critically acclaimed novels – A Sabbatical in Leipzig (Lilliput, 2020) and The Geometer Lobachevsky (Lilliput and Serpent’s Tail, 2022) – plus the evocative short story collection Midfield Dynamo (Lilliput, 2021).

The prize was established to promote new Irish fiction and to celebrate the memory of one of the country’s greatest masters of prose fiction, John McGahern (1934-2006), whose authorised biography Prof Shovlin is now writing under contract at Faber and whose edition of The Letters of John McGahern was published by Faber in 2021.

Professor Frank Shovlin said: “We were delighted to see a substantial increase in the size of the field this year with a nice mix of novels and collections of short stories, two forms with which John McGahern was so notably comfortable.

"Writers range in age from their early twenties to their late sixties and there was wide variation in subject matter, from historical novels to naturalist short stories and all points in between – our final shortlisting decision was not an easy one and I do not envy our final arbiter, Colm Tóibín, his having to choose a winner later this summer.”

The three shortlisted books published in 2021 reflect this striking variety of themes and authors: James Harpur’s The Pathless Country (Liquorice Fish Books); Louise Kennedy’s The End of the World is a Cul de Sac (Bloomsbury); and Eimear Ryan, Holding Her Breath (Sandycove).

The judging panel commented: “Harpur’s The Pathless Country in an historical novel that tracks Patrick Bowley, an apprentice carpenter from rural Galway, across time and space as he undertakes a spiritual quest. The novel shuttles between turn-of-the-century Ireland and London, capturing mounting social, political, and cultural tensions in the run up to the First World War and the Easter Rising. As Bowley endeavours to articulate his call for peaceful resistance, he is consistently thwarted by his own shortcomings and the powerful forces working against him: this is a successful portrait of a flawed and fated hero.

“On his journey, Bowley encounters others who have attempted to chart Ireland’s future course and capture its realities: WB Yeats and James Joyce are imagined into the world of the novel. But Bowley draws inspiration from a far wider pool, which includes Indian theosophists, Quaker pacifists, and militant suffragettes. Harpur writes throughout with compelling assurance, and the ambition of his plot sets this debut apart.”

“Louise Kennedy’s The End of the World is a Cul de Sac is an arresting first collection of 15 stories peopled by a gallery of women under pressure from men who are at best bullies and losers, and, at worst, rapists and murderers. Set largely in a post-boom rural west of Ireland of ghost estates and cannabis grow houses, the stories are filled with brilliantly realised observations and sparkling prose embedded in a landscape of darkness and failure. Always one feels a sense of truth telling, lived experience and permanence from this remarkably achieved volume. The collection has recently been followed by Kennedy’s well received debut novel, Trespasses (Bloomsbury, 2022).”

“Eimear Ryan’s Holding Her Breath is an elegant and fluently written campus novel about Beth, an elite swimmer who has had to take a break from the sport for the sake of her mental health. The world of relentless training was, she ponders, one that ‘became narrow, but deep.’ The strength she learned from this youthful discipline helps her to cope with an unhappy love affair with a lecturer who is a scholar of Beth’s late grandfather, Benjamin Crowe, a charismatic Irish poet who has died by suicide aged 44. Taking place over her first year at Trinity College Dublin, the novel sees Beth undertake a voyage of self-discovery via her growing interest in her grandfather’s work and her slow return to swimming.”

The winner will be chosen by novelist and current Chancellor of the University of Liverpool, Colm Tóibín, and announced later this summer. The £5,000 prize will be presented at the Liverpool Literary Festival on the weekend of October 7th-9th followed by a reading from the successful entrant.

Entries are now being accepted for debut books of fiction published in 2022, to find out more please visit www.liverpool.ac.uk/irish-studies/john-mcgahern-book-prize/