A call out for letters by the great Irish writer, John McGahern 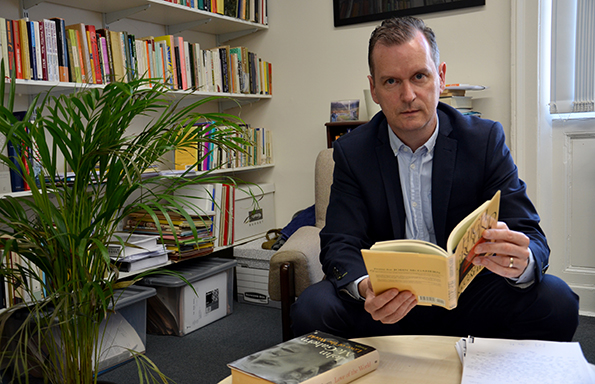 My own admiration for John McGahern goes back to 1990 when I was an undergraduate at University College Galway and read one of his greatest short stories, Gold Watch, as part of a course on Irish short fiction. It was a propitious year to begin my long and happy relationship with the work as Amongst Women hit the bookshelves and McGahern became a public man in Ireland, however reluctantly. Three years later in my final term I had the good luck to be taught by McGahern in a relaxed class where we sat around and chatted about books he valued.

John’s wife Madeline first approached me in the summer of 2014 to discuss the possibility of editing her late husband’s letters. It was an exciting proposal but one I had to think hard about because I could see the size and difficulty of the work ahead. But, given my deep respect and enthusiasm for the man and his writing, I was compelled to take on the job and have not regretted that decision even once in the nearly five years since. In 2015 the book was contracted to Faber & Faber, John’s British publishers throughout his career. Madeline’s support and friendship have been crucial and sustaining.

Through many long and enjoyable conversations over the past five years in Leitrim, London and Paris, I have learned a great deal about John McGahern, his life and his works. I am now coming towards the end of my task thanks, in large part, to the very generous support of the British Academy and the Leverhulme Trust: I have found and annotated over 1,200 letters from McGahern to a wide array of correspondents, from personal friends, to teaching colleagues, translators, and other writers such as Seamus Heaney, John Montague and Tom Paulin. The finished book will contain correspondence from every year beginning at 1958 up to John’s death in 2006.

The volume, when it is published, will, inevitably, mark one of the final collections of letters by a great Irish writer. Sadly, the letter has had its day, and while a few of us still hold out against its demise, fighting the tide of texts, emails, tweets and WhatsApp messages like Cúchulainn fighting the ungovernable sea, technological change has swept away pen and paper faster than anyone could have imagined possible. 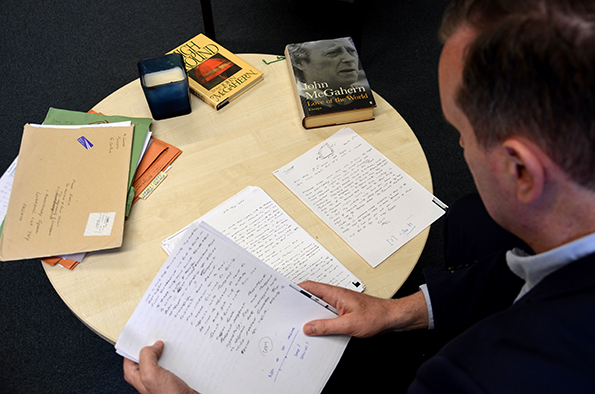 But John McGahern knew and accepted that change is one of the laws of life; even he was resorting to email in his final years – a few such messages will be included in the book. Though 1,200 letters may sound like a lot, I am lucky that McGahern was neither a voluminous letter writer nor a writer of long epistles. I am not faced with the terrifying Everest of, say, a WB Yeats, whose letters have been appearing now for several decades and in multiple volumes under the peerless editorship of John Kelly.

A typical McGahern letter is handwritten and rarely runs for more than a page. And yet that very brevity means there is little in the way of fat, and few letters I would want to exclude because they are either repetitive of other letters or simply too trivial in content to retain. Like Joyce, one of his key artistic exemplars, McGahern is scrupulously mean with language. That is not to say that the letters are not frequently gossipy or funny, but they rarely meander and always have a point, happy to mix high art with chainsaw oil or shotgun cartridges. The Letters of John McGahern will offer striking new insights into this great writer’s artistic and emotional worldview, and into the world of Irish writing from the late 1950s up to his passing in 2006.

The project has seen me do much leg work in search of documents: contacting archives, libraries and private individuals, capturing the letters and transcribing them, at times feeling more like one of McGahern’s favourite fictional characters, Herman Melville’s Bartleby the Scrivener, than a professor of Irish literature. And there have been many thrilling moments – a call from a key correspondent I had all but given up on promising me dozens of letters; time spent in the magnificent reading rooms of the New York Public Library where the sheer wealth of holdings led me to sigh in ways that must have alarmed my fellow researchers; or just finding that one line in that one letter that ties up the hunches and suspicions of years.

A number of archivists and libraries have been unfailingly helpful. Special Collections at the Hardiman Library in NUI Galway hold several runs of letters amid their vast and endlessly fascinating McGahern papers. The Faber archive in London’s Bloomsbury has been a joy to work in and has allowed me to shine light on one of the great enabling artistic relationships of John’s life with his editor and fellow Irishman Charles Monteith. Other institutions to hold McGahern letters include the University of Leeds; University of Texas; Linenhall Library, Belfast; National Library of Ireland; University of Victoria, British Columbia; University of Maryland; Indiana University; Emerson College, Boston; and Emory University.

I have also sourced hundreds of letters from private individuals who have been exceptionally generous in their help and willingness to see these documents enter the public realm. But I am conscious that there must be many more letters out there, yet to be uncovered. Naturally, I am keen to publish as full and as fair an account of McGahern’s epistolary life as possible and I am keen to hear from anyone who might hold a McGahern letter or letters however trivial it may seem to them. A short, courteous (and they were always so) letter on its own can seem insignificant, but when placed in a broader mosaic can be revealing of something deeper. Please do not hesitate to contact me at the University of Liverpool should you have letters you are willing to let me consult.

This article originally appeared in the Irish Times.