Name a Seat Stories: The personal stories behind the plaques, part seven

Launched to celebrate the new Yoko Ono Lennon Centre, the Name a Seat campaign has invited alumni and friends near and far to leave their personal mark on the University. Here are some of the brilliant stories from supporters who have chosen to name a seat.

“I met Danny Kane on 28 October 1968, my freshman year.  We graduated the same year and then, five years later, got our PhD on the same day – all in Liverpool.  We fell in love, married, had a child, moved to Australia and divorced.  But we never stopped loving each other and, in 2018, decided to remarry.  A few days later, Danny was diagnosed with a rare form of leukaemia and passed away just two months later.  But we had almost 50 years of love and friendship. The University of Liverpool was where it all began and where we left a big piece of hearts.  Memorialising Danny with a seat in the new theatre means he will remain a part of the university forever. After 25 years with the UN, I returned to university teaching in 2018 and am now Professor Kane.” - Professor June Kane (BA Hons French, 1972 and PhD Philosophy 1977)

“My mother (nee McGowan) was the first member of our family to go to university, studying French, German and Latin and then going on to become a secondary school teacher. During her time at Liverpool University, in her home city, she joined the student Jazz Band as a singer and they performed at the Cavern, before it was made famous by the Beatles. She continued singing, semi-professionally, whilst teaching, keeping her second career a close secret! She met my father on the Liverpool club circuit and they were both members of the local Musicians Union.

I followed her to Liverpool University in the late 1970s, studying Pure Maths and Philosophy and then going on to do a PGCE in Maths - though teaching wasn’t for me and I gave it up during teaching practice, much to my mother’s disappointment. A seat dedicated to her seemed ideal.” – Dr Elaine Fraser (BA Mathematics and Philosophy, 1982)

“I joined the University Orchestra in 1989 when I took up my post in the Department of Classics; I remained with the Orchestra until 2019. I have also been member of the University Chamber Orchestra, and have been running string quartets made of staff and students since 2013. Some of the highlights: playing Sibelius 3, Shostakovich 15, and Bruckner 7 under Tony Shorrocks; the Chamber Orchestra trip to Normandy in 2013; and with Q Quartets and its predecessor, GlasQuartet, playing Sibelius, Jadin, Mozart, Pärt, Beethoven, Brunetti, and especially Shostakovich’s 8th string quartet, Sean Doherty’s Arctic Violin written for us in 2019; and taking the quartets of the 6th Earl of Kelly on tour to Edinburgh also in 2019 – the first time that most of them have been played since the 18th century.” Dr Frederick Jones (Senior Lecturer in Archaeology, Classics and Egyptology at the University of Liverpool)

“I’m an alumna from 1981, Electronic and Electrical Engineering. I was the only girl in a class of 110 boys, also the only Turkish student in that class. Being 18, with no A levels like the rest but a school diploma, having just arrived from an overseas country, a different system, a different climate, I felt lost for a few months but thanks to my classmates and lecturers, I warmed up to my new circumstances within a few months, in the cold, rainy winter of Liverpool and felt like a princess.

I have very fond memories of the university and of Liverpool. Now, living and working in Oxford, I miss the warmth and friendliness of Liverpool very much. I think it is a great city and a great university.”  Dr Berna Bridge (BEng Hons Electric Engineering, 1981) 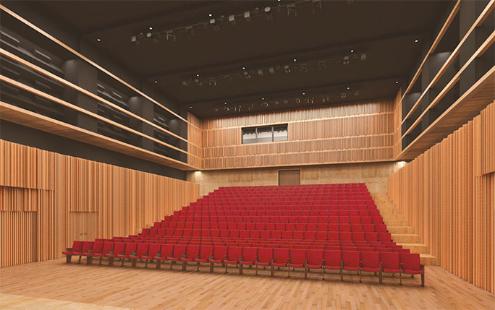 The Tung Auditorium will be located at heart of the Yoko Ono Lennon Centre.