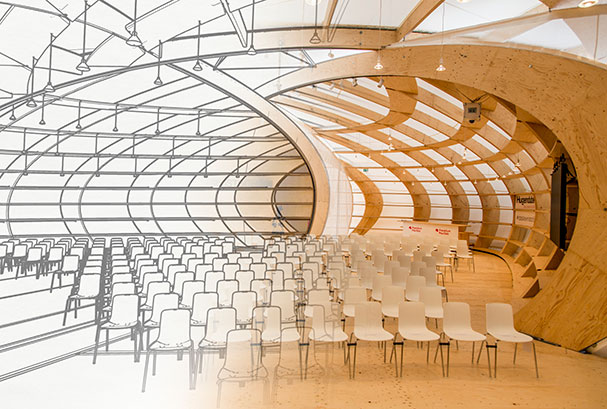 A talk by  Ragunath Vasudevan of schneider+schumacher

The talk will delve on the process of using parametric tools in architecture so as to create challenging spatial constructs with help of 5 completed projects done in the last 8 years at schneider+schumacher Design & Computation.

Ragunath V (1979, Mumbai (Bombay), India) is an architect, photographer and filmmaker based in Frankfurt, Germany. After completing his Bachelors in Architecture at the University of Mumbai in 2003, in 2005 he moved to Frankfurt, Germany for his M.A. in Advanced Architectural Design in the Ben van Berkel Class at the Städelschule. As a student he pursued his passion for photography, supported by studio visits with Wolfgang Tillmans and Simon Starling during which time his photography works have been exhibited in solo and group shows in Frankfurt (Germany), Murcia (Spain) and Amsterdam (The Netherlands). Since 2010 he is part of the parametric design group at schneider+schumacher in Frankfurt. At schneider+schumacher, he has been involved in the design and execution of a number of complex geometry based designs. The projects have been published extensively and one of the papers presented at the IASS was also awarded the Tsuboi Award for the best paper in the conference in 2014. In 2013 he was nominated and subsequently selected as one of two Fellows in the architecture section of the Young Academy 2013-2014 at the Academy of Arts in Berlin. He has also been awarded the Hessen Film Foundation grant for his full length documentary film “The Watson’s Hotel” developed at the Academy during his fellowship, which has been completed in 2018. Currently based in Frankfurt he pursues his passion for architectural innovation at schneider+schumacher and explores the boundaries and intersections between photography, film and architecture in his own works.