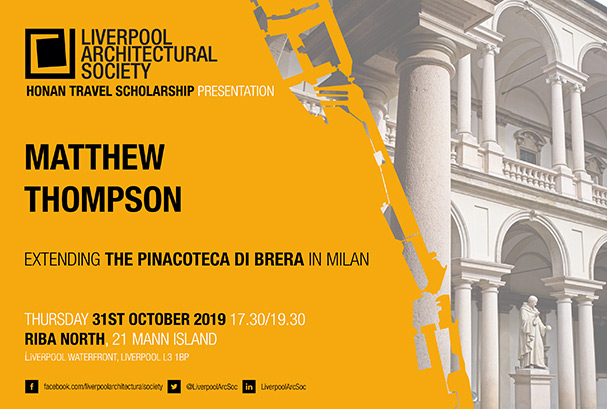 Matthew Thompson, an MArch 5 student at Liverpool School of Architecture, was this year’s winner of the International travel scholarship. Mathew will talk about his travel to Milan and ‘extending the Pinocoteca di Brera'. At the end of the talk, applications for Honan Travel Scholarship 2020 will be launched.

What is the Honan International Travel prize ?

In his will he gifted parts of his estate towards the completion of the St Matthews Church, Clubmoor, Liverpool and as a memorial scholarship the setting up of the Honan Prize of which the Liverpool Architects society host every year as the Honan Travel Scholarship.

Each year the Liverpool Architectural Society invites students of architecture in Liverpool to submit proposals for a study based trip. A scholarship is presented to the student or students whose proposal demonstrates the most appropriate and worthwhile use in the opinion of the LAS. We also ask that the student awarded the prize presents a talk on their visit to the LAS and fellow students following the trip.