Dr. Diaz De la O is a member of the Institute for Risk and Uncertainty and of the Centre for Engineering Dynamics in the School of Engineering, University of Liverpool. He obtained a BSc in Applied Mathematics (ITAM, Mexico), an MSc in Statistics and Operational Research (Essex, UK), and a Doctoral degree (Swansea, UK) under the supervision of Prof. Sondipon Adhikari and Dr. Jeremy Oakley. He was a post-doctoral researcher at the Civil and Computational Engineering Centre at Swansea, working in Prof. Michael Friswell's group on morphing aircraft. From June 2013 he is a lecturer at the University of Liverpool.

Dr Diaz De la O's research focuses in Bayesian metamodelling approaches for uncertainty quantification. In particular, he has worked on coupling Gaussian process emulators with stochastic finite element techniques. He is particularly interested in the uncertainty that arises from running only a small number of samples of expensive computer codes. He has applied metamodelling to quantify uncertainty in corrugated panels and bio-inspired materials for morphing aircraft. 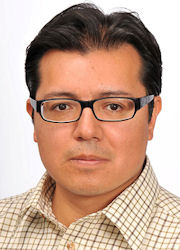