The new faces of the QUASAR Group Part 1 – LIV.DAT

The new Liverpool Big Data Science (LIVDAT) Centre for Doctoral Training kicked off this autumn and will be a hub for training students in managing, analysing and interpreting large, complex datasets and high rates of data flow. The QUASAR Group welcomed two new PhD students, Aravinda Perera and Selina Dhinsey, who will be taking part in this training programme.

Aravinda graduated with an MSci in Physics at Imperial College London in 2017. Whilst at Imperial, he was an Undergraduate Researcher in the John Adams Institute for Accelerator Science, where he worked on several projects in plasma wakefield acceleration (PWFA).

His MSci project explored potential variants of the currently used parameters for the AWAKE project at CERN, conducting investigations using the particle-in-cell code OSIRIS to build a model for the interaction of a long proton beam with a strongly 'quasi-non-linear' plasma wakefield.

Aravinda’s project will involve the development of enhanced models of beam-plasma interaction, including for the experiment at AWAKE, with a view to enabling optimisation and real-time diagnostics of beam properties in PWFA. 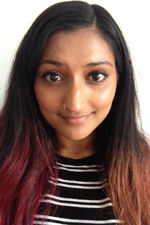 Selina began her undergraduate integrated Master’s degree in 2013 at the University of Liverpool. Her Masters project looked at writing a program using the imaging software image SXM in order to analyse and process images of DNA (supplied by the Liverpool Women's Hospital). The aim was to automate the process of identifying any abnormalities that may be present in the DNA and flag the sample, in order to aid a geneticist.

In July 2017 Selina graduated with an MPhys degree. Her research within the QUASAR group looks into modelling proton therapy for the treatment of cancer using Monte Carlo methods.