"bluedot Festival 2017 was a first for me in many ways. It was the first time I was involved in outreach, engaging the public in accelerator science. Not the easiest task, especially if you do not have a science background, however I had a great team around me and was learning every second. After a few hours of observing the experiments I was able to engage with old and young and always found a common ground with everyone that attended our stand, over the weekend we engaged with over 2000 people.

The sun was out and we had excellent views through the sun scope of solar flares which the kids and adults alike queued to see. We had a 4.5billion years old meteorite from Argentina on hand to help attract inquisitive minds. Our 3D printer was working non-stop producing tools and toys and was very inspiring to watch, although houses are now built using 3D printers we made our own discovery that you can’t print snot! 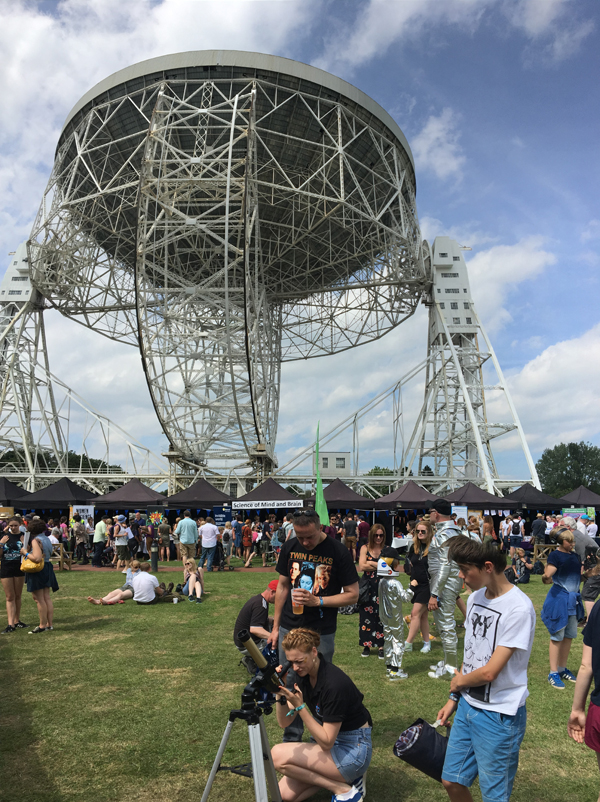 My highlight was watching Graeme and Wendy Beety, both retired teachers, using a VR headset for the first time. Watching just how intuitive the technology is to all age groups and the detail of the VELA model made me very proud to take part in the event.

Lastly the Salad Bowl, an experiment using a Van-der-Graff generator to produce electrons in order to accelerate a Ping-Pong ball round a large bowl was used to simulate a particle accelerator. This definitely sparked interest and a few electric shocks later I had a basic understanding of the concept. No salad leaves were hurt in the making of this story!

Overall the day was one of my favourite experiences, the festival showcased science in a fun and interactive way and the when the sun set we had the backdrop the magnificent Lovell telescope and a full moon to dance the night away. 10/10"