I’m Rebecca Boll, I studied physics at Heidelberg University, and in January 2011 finished my diploma thesis in the QUASAR group. I was part of the ‘exotic’ subgroup working on heavy ion and antiproton therapy at the Max Planck Institute for Nuclear Physics, supervised by Dr Michael Holzscheiter. For my thesis, I developed a beam monitor for quality assurance, which was tested both at the Antiproton Cell Experiment (ACE) at CERN, and at the Heidelberg Ion Beam Therapy Center (HIT). This was a very enjoyable time, which already gave me a taste of what it is like to do research at a large-scale facility, in an international collaboration. 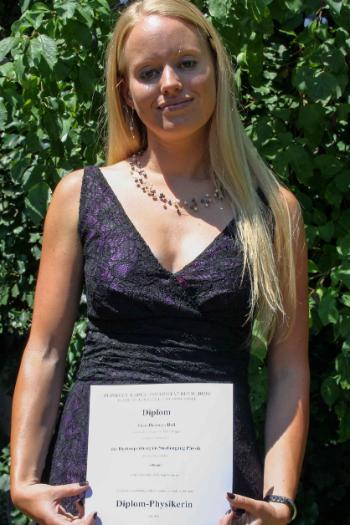 Afterwards, I decided to become a PhD student within the Max Planck Advanced Study Group (ASG) at CFEL in Hamburg, a joint initiative of several Max Planck Institutes, founded in 2007 to explore the scientific potential of the upcoming X-ray free electron lasers (FELs). My thesis project was to investigate the prospect of employing photoelectron diffraction to image molecular structure during ultrafast photochemical reactions in polyatomic gas-phase molecules – to record a ‘molecular movie’ with femtosecond temporal, and sub-Ångström spatial resolution.  The position in the ASG also gave me the extraordinary opportunity to participate in around twenty different experiments at FELs and synchrotrons in Germany, California, and Japan.  Interacting with scientists covering a broad range of research areas is something I particularly enjoyed, and the experience of working together in an exceptional team, to make things work on the spot for a successful beamtime, is an experience I would not want to miss.

Since I received my doctorate in 2014, I am a post-doc in the photon science department of DESY in Hamburg. I am the principal investigator of an experiment that will take place at FLASH, the free-electron laser in Hamburg, and have been Co-PI in other FEL beamtimes. My scientific focus lies on laser/X-ray pump-probe experiments, investigating structural dynamics and charge rearrangement mechanisms in molecules. Moreover, I was involved in installing a permanent user end station at FLASH, I participated in a first lab-based, ion-electron coincidence experiment with soft X-ray pulses from high-harmonic generation, and I also assist in supervising PhD students. I continue to be involved in several collaborations, while at the same time pursuing my own research, and I look forward to many more exciting experiments to come in the future!

Most new university students are not entirely clear about their future career perspectives. This might be particularly true for those engaging in accelerator R&D at some point of their studies, whether this is in the framework of a Master’s or PhD project as accelerator science is not a traditional subject area offered by all universities.

We have asked several former QUASARs to tell us what they are doing these days – often years after having successfully completed their research projects within the Group.

We hope that these personal stories will give you an interesting insight into the many different opportunities accelerator research offers and makes you want to find out more, by getting in touch with us.