A beam of electrons was first observed to be accelerated with a ‘gradient’ – or energy transfer rate - of 300 MV/m, which is very high for present-day accelerators, in a device rather like a microchip. This was made of silica glass and powered by a commercial laser beam, at the SLAC laboratory in the USA. It opens the way to build a particle accelerator “on a chip” much more cheaply than conventional ones. However, few studies have been done of the all-important quality of the particle beam that can be obtained from such a ‘micro accelerator’.

In an open access paper just published in the “Physics of Plasmas” journal, QUASAR member Yelong Wei and co-authors investigates the beam quality for such a micro accelerator, by running mathematical simulations. In the simulations the beam is given the same properties as expected in the CLARA machine which is a UK facility planned for the future. An electron bunch is fed into a specially-shaped grating-like structure with 100 miniature cut-outs called ‘periods’. Inside the device it interacts with a pulse of energy from a laser, as shown in the figure below. The various important properties of the electrons which have been ‘modulated’ or modified are then examined in detail.

The possible influences on the quality of the beam are also studied, for such a micro accelerator.  The particle simulations show the best beam quality that can be expected at the extreme ‘accelerating gradient’ - or rate of energy input - of up to 1.13 GV/m, while causing only a very  small deterioration in quality of 3.6%. 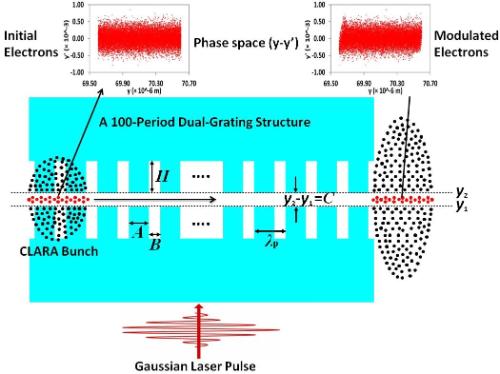 Schematic of an electron bunch travelling through the optimum structure to interact with a laser pulse.