A step back into the future – QUASAR Spotlight I

Most new university students are not entirely clear about their future career perspectives. This might be particularly true for those engaging in accelerator R&D at some point of their studies, whether this is in the framework of a Master’s or PhD project as accelerator science is not a traditional subject area offered by all universities.

We have asked a number of former QUASARs to tell us what they are doing these days – often years after having successfully completed their research projects within the Group.

We hope that these personal stories will give you an interesting insight into the many different opportunities accelerator research offers and makes you want to find out more, by getting in touch with us.

My name is Tobias Junginger. I used to be a student in the Quasar group from November 2008 until December 2011. I started in Heidelberg when the group was about to move to Liverpool. For me that was less of a concern than to other group members, since I was going to go to CERN in Switzerland in January 2009 to continue my PhD work there.  Geneva is where I spent the next six years working on superconducting radiofrequency (SRF) for particle accelerators. The ultimate goal of SRF research is to build electromagnetic resonators to efficiently accelerate particles. Current state of the art technology is based on niobium and enables six order of magnitude lower losses than normal conducting devices. However this requires cooling with liquid helium, in some cases even at temperatures of 2 K and below. Also the highest accelerating gradients are intrinsically limited by the critical magnetic field of the material. For niobium the limit is about 50 MV/m, well below what can be achieved with normal conducting technology. SRF researchers try to push niobium to its fundamental limit and also explore the applicability of new materials which potentially can outperform niobium. For this purpose I refurbished and extended a special cavity, the Quadrupole Resonator, which enables to measure the surface resistance of small samples with high precision over a parameter range inaccessible to standard cavity tests and similar devices. During that time the SRF activities at CERN increased strongly and therefore we decided to move the R&D activities to a designated lab. That led to my second job assignment. In January 2012, six month before graduation, I started my CERN fellowship. I was in charge of setting up an infrastructure for SRF R&D in CERN’s cryolab. This test place is quite convenient. All operations, including cryogenics, vacuum and RF testing can be done by a single person after appropriate training; an ideal place for R&D and to train students. Beside the Quadrupole Resonator we also tested single cell cavities produced by a novel sputtering technique (HIPIMS). Additionally we use a second smaller cryostat to test quench detectors of second sound. 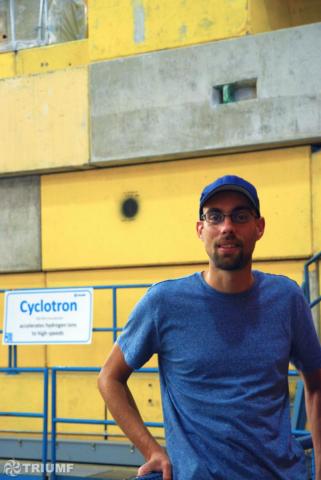 This picture shows me in TRIUMF’s meson hall, where we perform the muSR experiments. In the background you can see the “heart of TRIUMF”, its 500 MeV cyclotron.

During one of the Quasar group workshops I heard about possible option how to get funding for your own post-doctoral research. The option which tickled my fancy was the “Marie Sklodowska-Curie International Outgoing Fellowship”. I submitted an application and got funding for three years. The first two of these I will be spending in Vancouver, Canada at TRIUMF and the final one at HZB in Berlin, Germany. So December 2014 I sold most of my stuff, put the rest in a couple of boxes and packed my backpack. I decided to take the southeast way from Geneva to Vancouver via Vietnam, Laos, Cambodia, Nepal and Vietnam. I spent about one month in each country with my wife Nadine (We got married in 2014) before arriving directly in Vancouver with only our backpacks to start a new life.

My research here in Vancouver focuses on the optimization of superconducting cavities especially for continuous wave application. Currently I spend most of my time preparing and testing samples for several material science probes like muon spin rotation, beta detected nuclear magnetic resonance and neutron tomography. If I have some spare time I participate to the commissioning of TRIUMF’s new electron linac (ARIEL) and the operation of their radioactive isotope accelerator (ISAC-II).