Sun-drenched palm trees and luxury cruise liners dawdling in the balmy waters of the port of Barcelona presented a splendid backdrop to this year’s edition of the International Beam Instrumentation Conference (IBIC), brilliantly organised by members of the oPAC network at the Spanish synchrotron ALBA from 11th to 15th September.

The industrial exhibition, held in conjunction with the Conference, featured once more the University of Liverpool. The booth, manned by EU T.E.A.M.’s Dr Ricardo Torres, showcased the plethora of projects initiated by Prof. Carsten P. Welsch.

Information about the Initial Training Networks LA3NET and oPAC was complemented with OMA – Optimization of Medical Accelerators, and the brand new network dedicated to accelerators for antimatter physics – AVA.

The stand also promoted the European design studies participated by the Quasar Group: Eupraxia – for a compact European plasma accelerator with industrial beam quality – and EuroCirCol, for a future 100 TeV hadron-hadron circular collider.

D-Beam ltd, the Quasar Group’s spin-off company led by Alexandra Alexandrova, was also advertised at the booth. The company which specialises in optical diagnostics for accelerators was thus introduced to the world, attracting the attention of numerous potential customers.

IBIC is the world’s largest conference on particle beam instrumentation and this year it was attended by some 400 scientific experts and industrial delegates, therefore it was a unique opportunity to showcase Quasar’s projects and boost the visibility of the group in the world of particle accelerators. 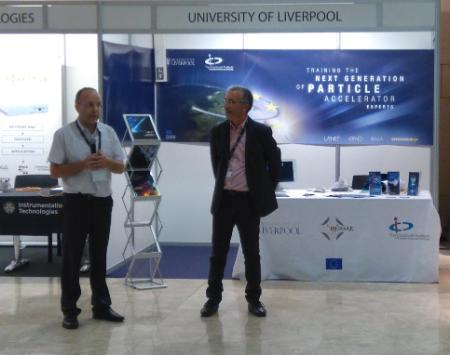