There has been an AWAKEning

‌The Advanced Proton Driven Plasma Wakefield Acceleration Experiment (AWAKE) aims at studying plasma wakefield generation and electron acceleration driven by proton bunches. It is a proof-of-principle R&D experiment at CERN and the world׳s first proton driven plasma wakefield acceleration experiment. It aims at demonstrating that very high accelerating gradients can be achieved in a controlled way in a plasma cell, driven by a high energy proton beam. This might open up ways to reduce the size, cost and complexity of particle accelerators very considerably in the future. 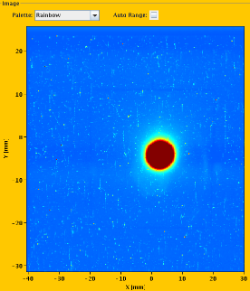 On 16 June a beam of particles has been sent through to the experimental for the first time, marking an important milestone for the international collaboration. This has allowed first tests of the proton beam line, the optics, beam instrumentation and alignment of the laser merging mirror. The image to the right shows an image from a beam-screen installed downstream the plasma cell tube.

In order to reach this screen the proton beam has to travel around 800 m of beam line as well as through a 10 m long plasma cell, which at the moment is just an empty tube as the plasma is not filled yet.

“What was really nice is that when we first sent the beam down the proton line to the experiment area, it immediately hit the last detector, verifying our calculations and installation. We can now move onto the next stage of commissioning. There is a strong and wonderful team behind this success,” explains Edda Gschwendtner, the project leader.

AWAKE is an international collaboration and a number of UK institutions are involved. The QUASAR Group is working closely with colleagues from the University of Manchester and CERN on beam dynamics and diagnostics studies. We are now looking forward to start collecting physics data by the end of the year. 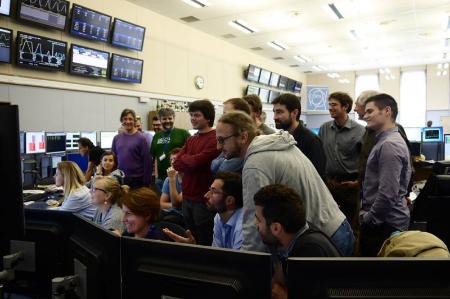 The operating team in the control room on the 16 June 2016 as the first beam is sent to the AWAKE experiment (Image: Ans Pardons/CERN)