FCC Week in the Eternal City

From Monday, 11 April to Friday, 15 April, more than 450 scientists, leaders of high-tech industry, universities and research centres gathered in Rome, to review the progress on Future Circular Collider (FCC) concepts for the post-LHC era. 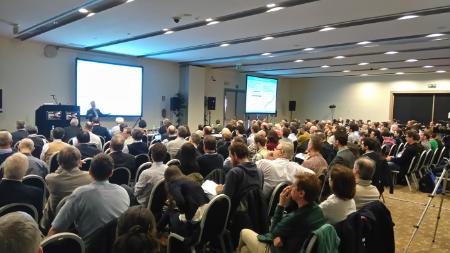 The FCC study started off in 2014 as a response to a request of the European Strategy for Particle Physics. The study embraces today 74 institutes from 26 countries and is hosted by CERN. The European Union supports this activity through the EuroCirCol Horizon 2020 infrastructure development project.

Ricardo Torres, from the Quasar group, was there representing the University of Liverpool as a member of the EuroCirCol collaboration.

The meeting in Rome showed that the FCC collaboration is growing to a global collaboration network. Michael Benedikt, FCC study leader, mentioned: “This puts a responsibility on our shoulders to keep the momentum and try to attract more collaborators in our effort of designing future circular machines that will serve the global scientific community.” It also showed a clear increase in the number of young researchers involved in the study as compared to last year’s FCC Week in Washington.

Michael Benedikt discussed the milestones passed since the Washington meeting and gave an overview of the progress in the different fronts of the study. The core of the FCC project is a hadron collider called FCC-hh – which aims at colliding proton beams with a centre of mass energy of 100 TeV – as well as scenarios for an electron collider (FCC-ee) and a proton-electron collider (FCC-eh).

Gian Guidice, Head of CERN's Theory Department, delivered an inspiring talk about the physics motivation following the recent discoveries at the LHC as well as in other fields of fundamental physics and reflected on the future of the High-energy field.

A report discussing the opportunities for physics discoveries with a future 100 TeV hadron circular collider was presented during the meeting.

Fabiola Gianotti, CERN Director General, gave an overview of the CERN roadmap for the next decades, whereas Asian and American counterparts presented the planned activities for future colliders in their respective areas of the world.

A series of parallel sessions dwelled on the more technical aspects of the study: magnet development, vacuum and cryogenics, beam dynamics, experiments and detectors, implementation and operation, etc. There was a session devoted to the civil engineering aspects of the project, where several options for the FCC tunnel layout were presented.

The socio-economic impact of large-scale research infrastructures was discussed in a plenary talk by Prof. Massimo Florio, from the Department of Economics. This impact was also stressed in the public event "Macchine per Scoprire: Dal Bosone di Higgs alla Nuova Fisica" that took place on the 14 April in the Auditorium Parco della Musica in Rome. CERN Director-General Fabiola Gianotti, and other leading scientists and economists discussed about the latest discoveries in physics, the societal benefits of large research facilities and the challenges lying ahead.

FCC Week 2017 will take place in Berlin from 29 May to 2 June. The FCC Week 2017, will offer the necessary space to review the baseline parameters of the different areas of the study along with available technological options in light of the preparation of a rigorous conceptual design report by 2019.

A collection of news articles about the topics discussed in the FCC Week 2016 can be found here https://storify.com/FCC_study