A Pathway to New Physics and Numerous Applications

High energy particle beams with extreme luminosities and ultra-bright beams of energetic radiation are ubiquitous tools for studying the structure of matter in a wide range of spatial and temporal scales.‌

Last century saw huge progress in the development of very efficient radio-frequency based accelerators. However, these require large scale research infrastructures in order to reach highest beam energies, such as the Large Hadron Collider (LHC) at CERN, Switzerland.

The AWAKE project at CERN aims at performing a first test experiment to validate the principle of a proton beam driven plasma wakefield accelerator. The experiment will use the 450 GeV beam of the Super Proton Synchrotron (SPS) to drive a wakefield in a plasma cell of up to about 10 m in length with a witness bunch of 10 MeV electrons injected behind it. Observing an electron energy change of about 1 GeV would validate the concept which has so far only been studied in simulation. 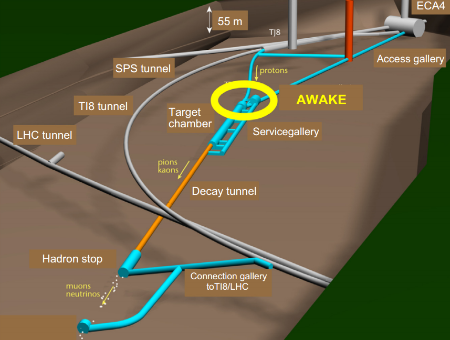 This fundamentally new concept is being studied by an international collaboration with strong involvement of the QUASAR Group. If successful, it might allow shrinking the size – and costs – of current accelerators very considerably.

A paper has just been published in the journal Nuclear Instruments and Methods A. It presents the conceptual steps in reaching the design of the AWAKE experiment currently under construction at CERN.