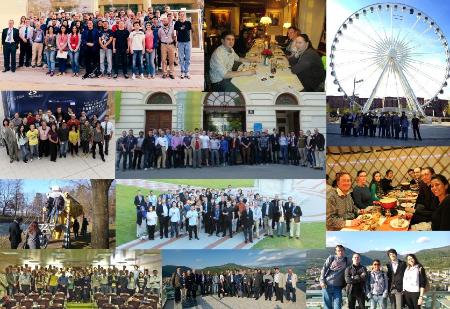 Monday 30th of November marked the official end to the oPAC project. This has been no ordinary project, being the largest European Training Network ever funded, it has managed to train 23 fellows in the optimization of particle accelerators and it has gathered a total of 35 partner institutions, between universities, research institutions and private companies.

Back in 2012 most of our trainees where just newcomers in the field of accelerator science. Now, after three years of hard work, they have acquired an interdisciplinary set of knowledge and skills that allows them to carry out cutting edge research. The training received has made them highly sought after by leading accelerator facilities and companies around the world.

It has been an intense but exciting journey. In addition to a large number of events where oPAC was present, we have organized five topical workshops, four training schools, an international conference, and an outreach symposium. The cherry on top was the International Conference on Accelerator Optimization in Seville, Spain, where our fellows had the opportunity to shine showing the high quality of their research. The works will soon be presented as part of a Special Edition of Physical Review Special Topics – Accelerators and Beams.

It was also fantastic to see the manifold links that have been established between the fellows, the partner institutions and collaborating scientists since the project started in 2011. But has oPAC really come to an end? Thankfully not! The Steering Committee in its last meeting decided to continue supporting our fellows in their development and communicate their research results internationally, raise awareness of the need for further national and international training programmes in this exciting field, and also organize further events across the project’s scientific work packages.

We are also planning a re-union workshop to discuss career opportunities in summer 2016, so there will be ample opportunities to maintain and strengthen the excellent links that have been developed during the four years of the project.

The coordination team is very happy and proud of having had the privilege to work with such a fantastic group of fellows and partners and wants to thank all the participants for their support and the always nice collaboration!