QUASARs star at the International Conference on Accelerator Optimization 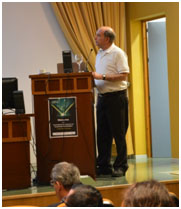 For two and a half days the Centro Nacional de Aceleradores (CNA) in Seville was home of a significant delegation of the international community of accelerator science, among which the QUASARs had a notorious presence.

The blue skies of Seville offered a splendid background for International Conference on Accelerator Optimization, the final official event of the oPAC network. The conference started on Wednesday 7 October with a review of the current status of the Large Hadron Collider and its future upgrades. The following session featured next generation machines, like the Facility for Antiproton and Ion Research (Germany) and the European Spallation Source (Sweden). Novel acceleration schemes using high-power lasers were also presented in one of the talks.

On Thursday there was a whole session dedicated to light sources, with representatives from Solaris (Poland), Soleil (France), ALBA-CELLS (Spain), and ESRF (France). This was followed by several talks on applications of accelerators, in which private companies like IBA group and Med Austron made a prominent contribution. 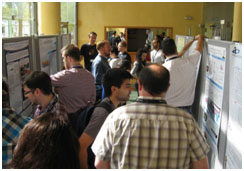 The Friday session devoted to detector technologies was almost take over by QUASARs, with talks by Ralph Fiorito, Adam Jeff, Hao Zhang, and Sergey Vinogradov, about the latest developments in high-resolution and non-invasive beam profile monitors, and beam loss monitoring systems carried out at the Cockcroft Institute and CERN. The works presented at the conference will be published in a special issue of Physical Review Special Topics: Accelerators and Beams.

In order to raise more awareness of the importance of accelerators for science and society the conference also sponsored an outreach talk, especially addressed to the Spanish public, about the treatment of cancer with particle accelerators. The talk, given by Prof. María Isabel Gallardo, from the University of Seville, reviewed the history of radiotherapy, the physical principles of their efficacy in diagnosing and treating cancer, and the future prospects of radiological techniques.

Professor Gallardo highlighted the hope offered by accelerators of a definitive cure for the disease, if only the necessary investments were made in facilities for ion therapy. The talk was attended by a large group of people, mainly students, who showed their interest in the topic by actively engaging in many questions.

In addition to the talks, the QUASARs could enjoy an excellent social program, thanks to the efforts of the local organising committee, the magnificent environment offered by Seville, and the succulent Spanish cuisine. 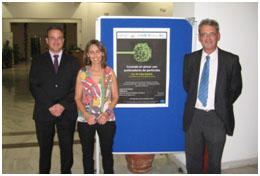 All presentations can be found on the conference Indico page. This conference was part of a series of events offered by the oPAC network coordinated by the Cockcroft Institute / University of Liverpool and led by Professor Carsten P. Welsch. The network is much obliged to CNA for hosting the conference, to our very own EU Project TEAM for the perfect organization, and to all the fellows who contributed to the success of the event.