The International Conference on New Photo-Detectors (PD15) was held in Troitsk, Moscow, Russia, between July 6 - 9, 2015. This conference is the 4th in a series of workshops on new photo detectors with previous meetings held in Kobe, Japan (2007), Matsumoto, Japan (2009) and Orsay, France (2012).

The conference objective was to discuss new ideas and recent developments in photo detectors and their application in various fields, ranging from high energy physics, neutrino physics, particle and astroparticle physics, nuclear physics, and medicine to industry. Silicon photomultiplier (SiPM) technology was one of the main conference topics.

Remarkably, this was the first conference in Russia related to SiPMs. A technology initially developed in Russia and in particular by scientists from the Institute for Nuclear Research that now hosted the conference in Troitsk.

Dr. Sergey Vinogradov, senior Marie Curie Fellow, represented the QUASAR Group at this international meeting that attracted more than 100 delegates. He gave an overview talk on “SiPM performance in photon number and time resolution” as part of the opening session and also presented a poster on the group's activities in addressing the “Challenges of arbitrary waveform signal detection by SiPM in beam loss monitoring systems with Cherenkov fibre readout”.

Participation in the conference and a visit to Troitsk were especially attractive for Dr Vinogradov as he used to live in Troitsk with his home just across the street from the conference venue: The School of Arts for Children, see photo. 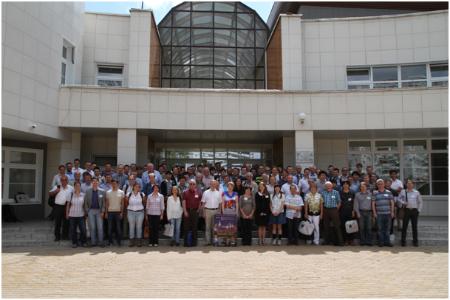