QUASARs Maria Kastriotou and Dr Eduardo Nebot visited the Australian Synchrotron Light Source (ASLS), in the suburbs of Melbourne, where they worked during more than three weeks with principal accelerator physicist Mark James Boland and his team. They are jointly developing diagnostic systems for future particle colliders based on the use of optical fibres within a project funded by the Royal Society.  Cherenkov light produced inside the optical cable during the crossing of charged particles can be used as a measurement of ionizing radiation.

Having characteristics similar to part of the accelerator complex foreseen for the future Compact Linear Collider (CLIC), the Australian Synchrotron gave the perfect opportunity for testing  an optical fibre-based monitoring system. During their visit, Maria and Eduardo installed two optical fibres to cover the full 216 m length of the storage ring of ASLS.  The first set of measurement were incredibly encouraging as the new system was able to identify unexpected events that happen as close in time as one billionth of a second.  The colleagues from ASLS were equally satisfied with the performance of the system and they will keep it as part of their standard diagnostics. 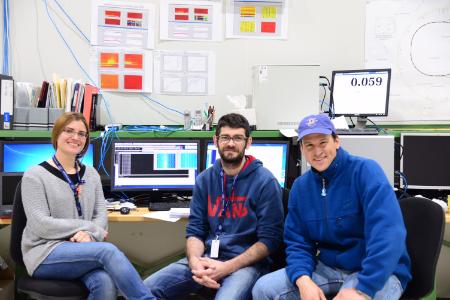 This visit was a very unique and a highly educative experience, providing the opportunity to work with a different team, a new environment and with a cutting edge particle accelerator that recently claimed the world record smallest transverse beams. Both QUASARs had the chance of operating the machine and got a great overview of the different beam lines and experiments in the facility. “We had the chance to work with a well oiled machine, achieve great results and meet an incredible group of people. We are extremely impressed and thankful for how accommodating, interested and welcoming were all the members of the staff at ASLS that we came across”, says Eduardo.

Moreover, Maria and Eduardo had the opportunity to walk around the beautiful city of Melbourne, experience a different cultural lifestyle, enjoy the Australian hospitality and even try some delicious and exotic meals. “I was very excited about tasting Kangaroo and I am not disappointed. It was one of the top 5 meals I have ever had”, says Maria.