Giacomo Manessi has successfully defended his PhD thesis in a viva that took place at the University of Liverpool. The final version of this thesis can be found here. 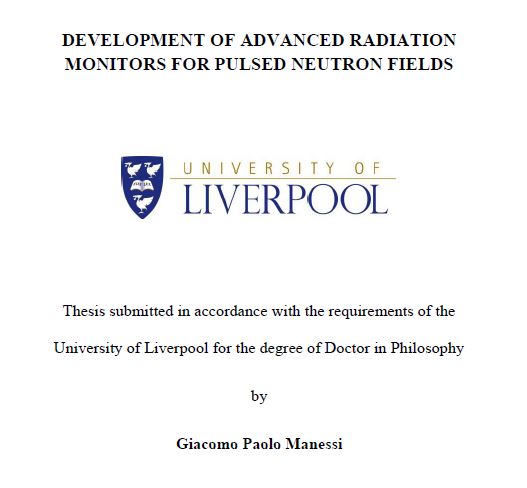 Giacomo studied radiation detectors capable of efficiently measuring in pulsed neutron fields and was based in the Radiation Protection Group at CERN under Dr Marco Silari. He carried out R&D into the LUPIN detector - a neutron detector that combines an innovative acquisition electronics based on logarithmic amplification of the collected current signal and a special technique used to derive the total number of detected neutron interactions. Due to its special working principle, LUPIN is capable of overcoming the typical saturation issues encountered in state-of-the-art detectors, which suffer from dead time losses and often heavily underestimate the true neutron interaction rate when employed for routine radiation protection measurements.

Giacomo’s thesis presents a comprehensive study into the design, optimisation and operation of two versions of LUPIN, based on different active gases. In addition, two other devices, a beam loss monitor and a neutron spectrometer, which have been built using LUPIN’s acquisition electronics, are also discussed in detail. Experimental results obtained in a number of facilities where the detectors have been exposed to most diverse and extreme conditions are shown in order to demonstrate the superior instrument performance in a critical assessment with commercial devices commonly employed for personnel and machine protection. It was a very comprehensive study that led to numerous papers and talks over the years. After the end of his studies, Giacomo has recently joined ELSE NUCLEAR S.r.l. in Italy where he continuous to carry out R&D.