The Astroparticle Physics European Consortium (APPEC) Technology Forum: Photosensors & Auxiliary Electronics (ATF 2015) was held at Nymphenburg Castle in Munich, Germany between April 22 - 23, 2015. It focused on recent advances and challenges in technologies related to low light-level detection in astroparticle physics and medical applications. About 60 experts shared their knowledge in this high tech area and discussed technical details and technology decisions, as well as project timelines and funding plans.

Almost all ongoing and planned projects in astroparticle physics have high demands on the performance of ideally inexpensive and reliable photodetectors. This includes for example the ALPS, Pierre Auger Observatory, DARWIN, GERDA, IceCube, JEM-EUSO, KM3NeT or XENON projects. Silicon Photomultipliers are considered as a competitive alternative to photo multiplier tubes in around half of these projects, especially when it comes to large arrays with a fully-integrated control and readout electronics. 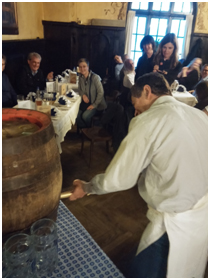 In addition to his talk, Dr. Vinogradov was also selected to tap a keg of Augustiner beer at the “Zum Augustiner” restaurant as part of the official opening of the ATF dinner.

‌At Munich’s Oktoberfest this ceremony is the duty of the Mayor of Munich as part of the traditional opening of the festival. Dr. Vinogradov did equally well and it was the beginning of an enjoyable evening event.