Exploring the Power of CID Technology

Blaine Lomberg, QUASAR Group Member at the Cockcroft Institute and the University of Liverpool spent two weeks at an R&D Company called Thermo Fisher Scientific in New York, USA. Thermo Fisher is one of two major brands within the company and is a world leader in serving science. It provides customers with a diverse range of high-end analytical instruments, technologies and solutions within all areas of science.

The Thermo CIDTEC division offers a unique set of cameras and imagers. In particular their Charge Injection Device (CID) cameras are a very interesting piece of technology when used as a beam diagnostic instrument in particle accelerators. They can be used to monitor radiation or to measure the profile of the light generated by charged particle beams, with an exceptionally high dynamic range.

In collaboration with Thermo Fisher Scientific the CID technology was tested in the area of beam instrumentation, especially to further evaluate the limitations in which the device can measure halo particles in a beam. This is in direct relation to Blaine’s main research project topic which involves studying the composition of particles within the tail and halo region of a particle beam. 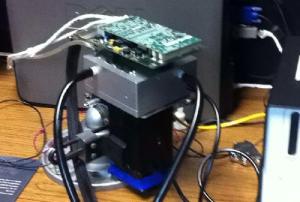 ‌‌During the visit, the performance of a brand-new version of Thermo CID821 camera was critically evaluated. This camera is intended for measuring signals with an extremely high dynamic range, i.e. to observe light emission signals in the very low intensity regime, while simultaneously observing signals in the very high intensity regime. Observing the very dim regions of the beam is particularly difficult to measure with conventional detectors and cameras however, the CID camera makes this possible. This possibility is due to its unique pixel design, in which excess charges can be injected into the silicon substrate without saturating any pixels, while performing a signal readout.

During his secondment Blaine characterized the camera with standard detector tests for determining its readable noise and linearity with respect to measuring the amount of light in correlation to charge obtained. In addition, various measurement algorithms were used to determine the limits and capabilities of the camera and to ultimately optimize the device. Several evaluations were made and discussed with experts from Thermo Fisher, indicating ways how the device performance might be further improved in the future.

Blaine felt working within an R&D company as opposed to the academic sector was a new and enlightening career experience. He commented that: “The knowledge gained from working first hand within industry is vital for any prospective scientist to flourish”. He has gained insight into how a Company operates as well as learnt how to test the boundaries and limitations with technology in respect to imaging devices and how to improve them with respect to software and electronics.