Combining Lasers and Accelerators to Train the next Generation of Researchers

The LA3NET consortium held an Advanced School on Laser Applications at Accelerators between 29 September and 3 October 2014. The event was hosted by the Spanish Pulsed Lasers Centre (CLPU) in Salamanca, Spain and attracted over 70 participants from all over the world.

The school was opened by CLPU Director Prof. Luis Roso and Dr. Enrique Conejero Jarque from the University of Salamanca with introductions on behalf of the host institutes. This was followed by a brief overview of LA³NET before the main lecture programme started. The first day included talks about an introduction to lasers, the history of accelerator development in Europe, accelerator applications, as well as beam generation, acceleration and diagnostics – all given by internationally renowned lecturers.

Day two included lectures on laser ion sources, photo injectors and Free Electron Lasers (FELs), in addition to a two-hour study session giving delegates a chance for a hands-on look at some of the topics covered. An outreach talk about "attosecond science" by Prof. Luis Plaja in the evening on the main University of Salamanca campus attracted more than 100 students from the university and local high schools in addition to the school participants. 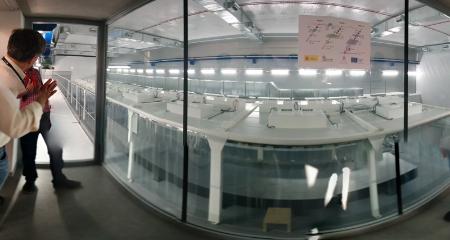 The following days covered advanced topics in ion and electron acceleration, commonly used simulation codes for accelerator design and optimization, as well as industry applications of accelerators and lasers. This was complemented by a Laserlab-sponsored visit to the facilities at CLPU, a second study session and a lively poster display and industry exhibition, sponsored by Danfysik. The School drew to a close with talks on THz applications, compact X-ray sources and the Extreme Light Infrastructure (ELI) project.  The School stimulated many fruitful discussions throughout the week and was an excellent addition to the many scientific events the network has organized to date. All presentations can be found on the School’s Indico site.

LA³NET is indebted to CLPU staff and in particular Ms. Yaiza Cortés for the local organization and support. The effort of all lecturers for their hard work and excellent contribution to make the School such a success is also appreciated.