An industry stand was taken to showcase the European ITN projects DITANET, LA³NET and oPAC coordinated by the QUASAR Group at the International Particle Accelerator Conference IPAC12 held in New Orleans 21st-25th May 2012. 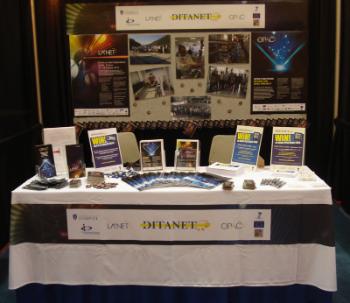 IPAC is the main conference for particle accelerator science held annually with over 1,200 top scientists and engineers attending five days of oral presentations, poster sessions and networking based around 85 industry exhibition stands. 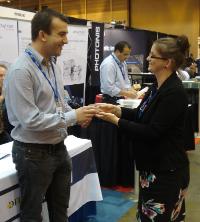 Brochures and flyers outlining the projects, trainees and partners were handed out to interested parties in addition to several marketing items. Flash drives were loaded with links to all DITANET events and selected published papers from trainees. In order to encourage engagement and attract people to the stand competitions were held. Four small prizes were offered to those lucky enough to find a prize link on their flash drives and 2-ipods were given as prizes in a business card draw and New Orleans quiz draw.‌ 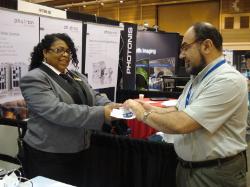 Many new contacts were made in addition to providing an excellent opportunity for the management to catch up with existing partners attending the event.‌

The effort also successfully raised the profiles LA³NET and oPAC on the international stage for particle accelerators achieving the three main aims to:

In addition to the exhibition stand, QUASAR Group leader Carsten Welsch presented a series of posters on the scientific results from the network, and QUASAR Adam Jeff displayed an electronic poster which gained significant interest.