How to characterise a beam - without touching it

Non-invasive beam measurements are becoming more important for essentially all accelerators and they are probably the only possible option for future high energy colliders. QUASARs Blaine Lomberg, Vasilis Tzoganis and Adam Jeff all attended the 9th DITANET workshop at CERN in Geneva, Switzerland between 15th -17th April 2013.

The 3 day workshop focused on non-invasive beam size measurement for high brightness proton and heavy ion beams. The main part of the workshop aimed at preparing non-invasive transverse beam size monitors for the LHC and its injector chain to fulfil the future emittance measurement requirements for LHC beams after the current long shutdown. The workshop was attended by experts from Europe and the USA and intense discussions took place throughout the event. 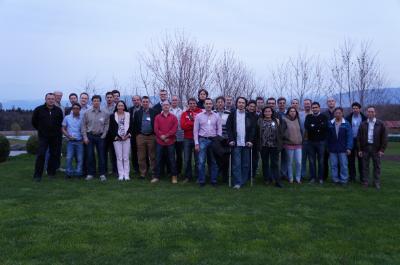 Blaine commented. ‘The topics covered consisted of an exciting blend of innovating ideas for the next generation of non-invasive transverse beam size monitors. It was an insightful place for interaction of budding scientists with researchers from around the world to discuss the cutting-edge and future technological trends in the arena of beam monitoring and accelerator optimization.’

Vasilis, the group’s only RIKEN-Liverpool fellow, described the workshop as a stimulating environment to share new ideas and believes that the sessions were enlightening and helped in proposing new solutions to the current difficulties and restrictions faced when optimizing beam transmission in accelerators.

Adam contributed a talk on ‘gas jet monitors’ – one of the QUASAR Group’s main research activities at the moment.