Former DITANET fellow and QUASAR Janusz Harasimowicz successfully defended his work in a several hour-long viva last Thursday, May 16th in Liverpool. His worked focused on the development of beam diagnostics for low energy ion and antiproton beams. The diagnostic of these beams is a challenge because most detectors are either not sensitive enough or too disturbing.

In his work, a set of optimised detectors has been developed to suit the particular beam diagnostic needs of the novel Ultra-low-energy Storage Ring (USR) at the future Facility for Low-energy Antiproton and Ion Research (FLAIR), accommodating as few as 10E7 particles at energies down to 20 keV.  ‌ 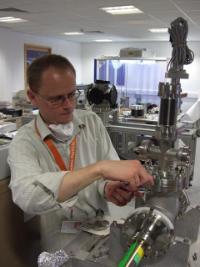 The instrumentation he studied includes beam profile monitors based on scintillating screens and secondary electron emission, ultra-sensitive Faraday cups for absolute intensity measurements, and capacitive pick-ups for on-line beam position monitoring. His thesis presents results from theoretical studies and modelling, the design of prototypes of all monitors, and results from measurements with beam. All detectors were characterised in detail, their individual limitations described and options for further improvements indicated.

Whilst initially developed for the USR, the instrumentation developed during his work in the group is also well suited for use in other low-intensity, low-energy accelerators, storage rings, and beam lines.