Does Newton’s Anti-Apple fall down ?

The main goal of the AEgIS experiment at CERN is to test the weak equivalence principle for antimatter. AEgIS will measure the free-fall of an antihydrogen beam traversing a Moiré deflectometer. The goal is to determine the gravitational acceleration with an initial relative accuracy of 1% by using an emulsion detector combined with a silicon micro-strip detector to measure the time of flight.

Nuclear emulsions can measure the annihilation vertex of antihydrogen atoms with a precision of ~1–2 mm r.m.s. 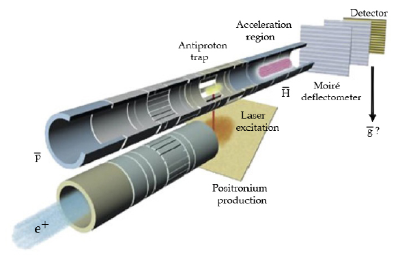 In a paper that was just published in the Journal of Instrumentation results for emulsion detectors operated in vacuum using low energy antiprotons from the CERN antiproton decelerator are presented, compared with Monte Carlo simulations, and the impact on the AEgIS project is discussed. A dedicated detector test chamber, as well as highly sensitive MCP-based secondary emission monitor for initial beam steering, were crucial for these measurements.