LEAP 2013 was the 11th international conference on Low Energy Antiproton Physics and this year hosted by Uppsala University, Sweden, between June 10th-15th 2013. LEAP is an interdisciplinary forum centered around the antimatter partner of the proton. The field of antiproton physics has seen a number of recent breakthroughs: demonstration of long-lasting trapping of anti-hydrogen atoms, first spectroscopic measurement of anti-atomic hyperfine structure levels, progress in the development of anti-hydrogen beams, and approval of the new Extra Low Energy Antiproton Ring (ELENA). 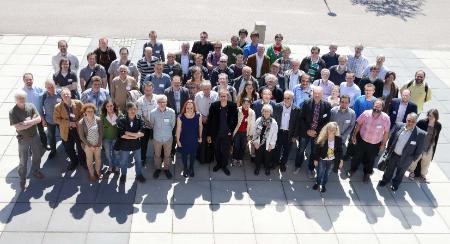 Exciting developments are also taking place in searches for antimatter in the universe, with satellite and balloon experiments. Studies of proton-antiproton annihilations leading to exotic gluon-rich states offer perspectives for a better understanding of the strong force and the structure of hadronic matter.  Finally, the start-up of the Facility for Antiproton and Ion Research (FAIR) in Germany will mark the beginning of a new era for antiproton physics with promises of far-reaching insights into structure of matter and the evolution of the Universe. LEAP 2013 actively stimulated the overlap and dialogue between various research forefronts in the diversified field of antiproton physics.

Dr. Oleg Karamyshev represented the QUASAR Group at this year’s LEAP conference. He contributed a talk on the Ultra-low energy Storage Ring (USR) at FLAIR and a poster summarizing recent diagnostics studies carried out by QUASARs Alejandro Sosa and Dr. Adam Jeff with the AEgIS collaboration. 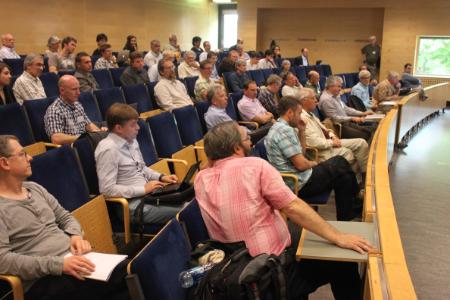 In his talk he described the final design of the USR which shall provide cooled beams of antiprotons at energies as low as 20 keV. The ring features both, slow and fast extraction, an electron cooler, will be able to provide nanosecond beam pulses for in-ring experiments and offers enough space for e.g. a merged positron ring for creation of antihydrogen in flight. A full set of beam diagnostics for the USR has also been developed and results from measurements at different facilities were presented. Finally, the mechanical design of the USR was shown which shall soon be published in a Technical Design Report.

Our poster presented results obtained at the AEgIS experiment at CERN. There, we tested different diagnostics and detectors for monitoring low-energy antiproton beams. This included a Secondary Emission Monitor (SEM), emulsion foils and Silicon detectors.

LEAP was found to be a stimulating meeting point of the community and provided ample of room for discussion.