The QUASAR Group from the University of Liverpool, based at the Cockcroft Institute, has successfully delivered a gas jet-based beam monitor to CERN. This advanced monitor was developed as part of the Group's contribution to the High-Luminosity upgrade of the Large Hadron Collider (HL-LHC) collaboration. The HL-LHC project, a large international collaboration, will upgrade the LHC by increasing the number of particle collisions by a factor of 10, allowing physicists to learn more about the properties of the Higgs boson and supporting new discoveries.

Previously, due to the destructive power of the beam in the LHC, it was difficult to measure the beam profile using conventional interceptive methods. The supersonic gas jet curtain overcomes this limitation by using either nitrogen or neon gas to monitor the main beam. The beam passes through the gas curtain screen and excites the molecules in the gas. This leads to the emission of light which can be recorded by an optimized camera system. Due to the high directionality of the supersonic jet and a large number of highly efficient vacuum pumps, the vacuum in the surrounding chamber and hence the main beam will be minimally perturbed. 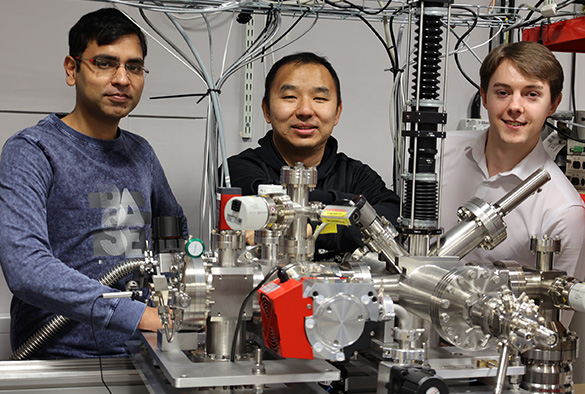 QUASARs Narender Kumar, Hao Zhang and Oliver Stringer (from left) and the gas jet before shipment.

The monitor was successfully tested in a dedicated setup at the Cockcroft Institute's DITAlab. Using a continuous electron beam with 5 keV energy and 0.6 mA current, the Group probed the detailed properties of the electron beam. The results showed a very good agreement with other methods whilst an excellent vacuum quality was maintained. Other experiments were done to test different geometries of the gas jet curtain and explore the possibility of replacing the turbo-molecular pump with Non-Evaporable Getter (NEG) pumps to further reduce the size and complexity of the monitor. Once these tests were completed, the monitor was ready to go to CERN. It was successfully received at CERN's Prevessin site in France on Thursday, 17 March 2022.

This delivery marks a significant milestone for the QUASAR Group in contributing a large scientific instrument to the world's highest energy particle accelerator as part of an international collaboration. Over the next months, the monitor will be commissioned at CERN and used to measure the beam properties at the Electron Beam Test Stand (EBTS) for the Hollow Electron Lens (HEL). These measurements will help finalize the design of the Hollow Electron Lens - a device to remove halo particles from the proton beam, which can potentially be harmful to the machine protection and reduce experimental accuracy. Once these tests have been conducted, the monitor will be installed in the LHC itself and provide more detailed information about the beam stored in the LHC than ever done before.