What would you do with a mini accelerator?

EuPRAXIA marks centenary of Bruno Touschek, Father of Colliders, with a challenge to visionaries

100 years after the birth of the ‘father of colliders’ Bruno Touschek, and sixty years after his ground-breaking electron-positron e-e+collider accumulated its first electrons, plans for a ‘tabletop’ accelerator have been submitted to the European Strategy Forum on Research Infrastructures by the EuPRAXIA project. The roadmap will facilitate the development of small, affordable accelerators for use in hospitals, industry and science and opening the opportunity for new innovation.

When Bruno Touschek needed a more powerful accelerator for his ground-breaking hadron collider, he loaded the collider onto the back of a truck and drove across the alps from Frascati in Italy to Orsay near Paris. Sixty years later, small is again beautiful and plans for a powerful tabletop accelerator have been included within the European Strategy Forum on Research Infrastructures roadmap, designed to facilitate projects highlighted as world-leading science. 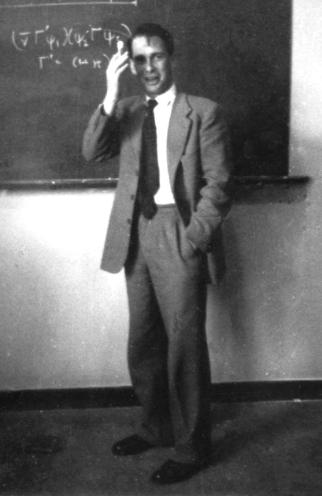 Touschek is an inspiration to current accelerator scientists, explains Professor Carsten P Welsch, EuPRAXIA’s Communication Lead and Head of the QUASAR Group. EuPRAXIA is celebrating Touschek’s centenary and the achievement of his matter-antimatter collider, which was the world’s first, with a special prize for a visionary in accelerator science.

Prof Welsch continues: “Touschek saw the potential of colliders before he built one. Most of the technologies in our digital world have been facilitated by accelerators. By making the technology accessible to hospitals, industry and research it could offer new applications that we can only dream about.”

The accelerator designed by EuPRAXIA will use lasers or electron beams to propel electrons forward on a wave of plasma. The result will be a much smaller, affordable accelerator that uses accelerating gradients up to 1,000 times higher than can be achieved with the current RF technology. 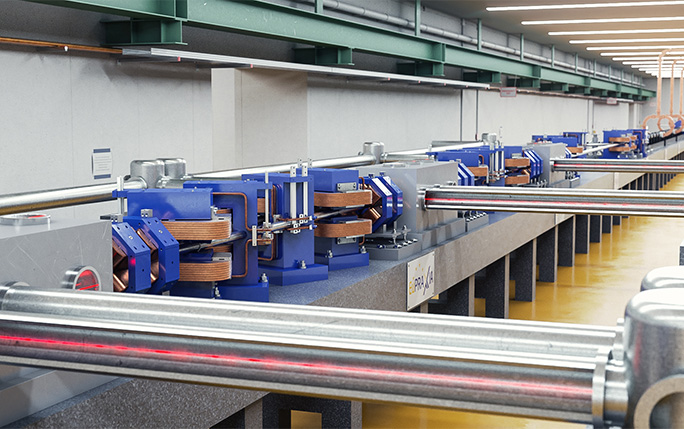 Rendering of the two-stage, very low energy spread plasma accelerator developed for the EuPRAXIA facility. The open tubes show the paths of the laser pulses (red lines) that drive the plasma wakefields in the vacuum chambers. (Image: EuPRAXIA)

The Head of EuPRAXIA, Ralph Assmann, comments: “The possibilities offered by novel plasma acceleration technology are limited only by our imagination. It will open the way to a new generation of applications by offering compact free-electron lasers (FEL), compact sources for medical imaging and positron generation, tabletop test beams for particle detectors, and deeply penetrating X-ray and gamma-ray sources for material testing. Being part of the roadmap is an important next step into fulfilling this goal.”

Although Touschek’s e-e+collider was just 1.3 meters across, it showed the feasibility of electron-positron collisions, paving the way for other machines, such as the large hadron collider, which would discover new fundamental particles and bring the experimental confirmation of the Standard Model.

Touschek was one of the first to see the potential for annihilating protons and electrons into pure energy. He identified the challenge as “having the first machine in which particles that do not naturally live in the world that surrounds us can be kept and conserved”. He then persuaded a team of Italian scientists eager to start their first experiments to instead convert their newly built electron synchrotron into an electron-positron storage ring – a pre-requisite of a collider. Amazingly, the team agreed and a year later it was accumulating its first electrons.

Professor Welsch continues: “Bruno Touschek is a motivational figure and demonstrates what can be done if you have a clear vision and international cooperation.”

“On the wake of Bruno Touschek”, says Massimo Ferrario senior scientist at Laboratori Nazionali of Frascati , “INFN is still pursuing advanced accelerator developments, in the framework of the EuPRAXIA collaboration,  an excellent way to confirm the importance of the Touschek's legacy by the Italian scientific community.”

“We are inviting visionary ideas for applications for the new table-top accelerator, to start us all thinking about a bright new future.”

If you have a burning idea for a new application for a mini accelerator – send it to Twitter @livuniphysics #EuPRAXIA or Prof Carsten Welsch c.p.welsch@liverpool.ac.uk by 31 March 2021 – we are offering 100€ for the most novel idea.