We are delighted to announce that Dr Elefterios “Lefteris” Skordis has just completed his PhD project on Radiation impact of collimation beam losses in the LHC and HL-LHC. Throughout his project, Lefteris was based in CERN’s Beam Matter Interactions section under the supervision of Dr Anton Lechner, whilst being connected with the rest of our group via weekly online meetings and various events.

In his project, Lefteris improved the complex simulation chain involved in the study of the collimation related beam losses, as well as in the improvement of its predictive capabilities. His thesis describes the first benchmark against Beam Loss Monitor (BLM) measurements with an extensive analysis of particle showers and their origins. He also quantifies the radiation impact that beam losses have in the collimation system itself, as well as in the normal and super-conducting magnets. Finally, he describes the long-term degradation of organic and crystalline materials found in the magnets and collimator absorber blocks, respectively over the HL-LHC lifetime.

His work has made important contributions to the operation and optimization of the LHC and its future upgrades. The full thesis can be accessed via this link. 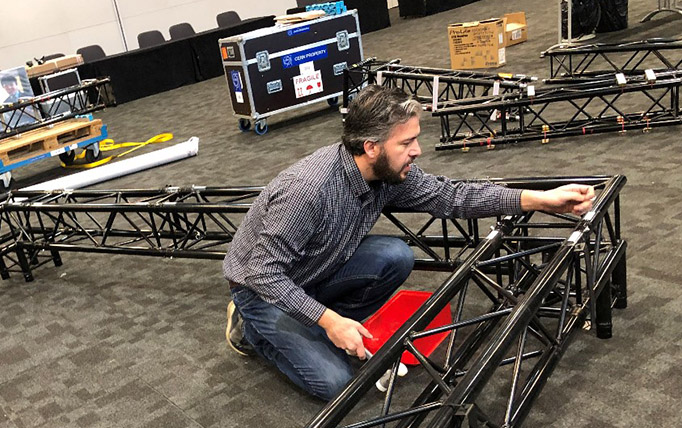 Lefteris assembling the interactive LHC tunnel at the ACC.

In addition to his research, Lefteris has contributed to a large number of our events and activities. Special highlights for me personally were his contribution to our our School on Monte Carlo simulations in Munich (and the dinner with Schweinshaxe with him), as well as the new record he set in assembling CERN’s interactive LHC tunnel for our 2019 Symposium on Particle Colliders – Accelerating Innovation.

It was a great pleasure having you in our group, Lefteris! We wish you all the very best for your new challenges at AVO!