The creators of the Tactile Collider, an innovative project designed to make the science of the Large Hadron Collider (LHC) accessible to all, have been awarded the 2019 Outreach Prize from the High Energy and Particle Physics Division of the European Physical Society (EPS). 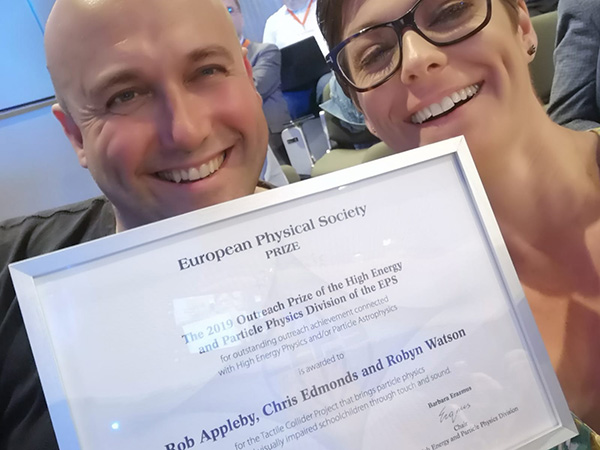 The Tactile Collider is a collaborative venture between QUASAR Group member Dr Chris Edmonds from the University of Liverpool, Dr Rob Appleby from The University of Manchester and Robyn Watson from Bolton Sensory Support Service. The team used innovative methods to make the physics of particle accelerators accessible to blind and visually impaired audiences for the first time.

“The way we teach young people to understand scientific ideas and concepts has traditionally been through the use of visual diagrams or analogies that relate to the observable world around us. But this has meant that many visually impaired children have been deterred from studying scientific subjects at university or pursuing a career involving science,” explained Dr Chris Edmonds, co-creator of the Tactile Collider and Lecturer in Physics at the University of Liverpool.

Instead, the Tactile Collider team have used cutting-edge technologies such as 3D printing and data sonification to create experiences that allow the science of particle accelerators to be understood through touch, sound and conversation.

The Tactile Collider is now into its third successive year of touring around the UK, growing increasingly popular with pupils and teachers alike. The events also include Continuing Professional Development (CPD) sessions for school teachers to provide them with the training and skills needed to make science more accessible to young people with visual impairments.

The Tactile Collider has already made a huge impact since it was created in 2017, as one teacher explained, “I feel more confident in supporting young people, particularly those with a visual impairments. The Tactile Collider has inspired me to be more creative in the way I present science and find new ways to describe difficult concepts in a way that is easier for my pupils to understand.”

In March 2019, the Tactile Collider was exhibited at the “Particle Colliders: Accelerating Innovation Symposium”, held at the Liverpool Arena and Convention Centre. The international Symposium saw almost 1,000 delegates from academia, industry and local schools come together to engage with the science and technology of particle colliders. The event was further designed to be inclusive for visually impaired audiences through the use of an a narrator who explained all the visual content that was being presented via Bluetooth headsets, which was the first time that this method had been employed at an accelerator science event.

“The University of Liverpool plays a lead role in Europe in communicating the science and technology of accelerators, and their many applications to a diverse range of audiences. The Tactile Collider has created a truly unique approach to explain the science and technology of accelerators to visually impaired audiences,” said Professor Carsten Welsch, Head of the Department of Physics at the University of Liverpool.

For more information on the Tactile Collider, visit: http://tactilecollider.uk