A new paper has just been published in 'Review of Scientific Instruments' resulting from work into electron-beam generation led by the Quasar Group in collaboration with ASTeC.

The ability to perform quality electron-based accelerator experiments is ultimately linked to the characteristics of electrons from where they originate. For many accelerators electrons are obtained from photocathodes where a laser shines on a material and liberates electrons which are then used for experiments. Finding materials and preparation techniques which generates electron beams with small energy spreads has been the Holy Grail of accelerator photocathode research for the past decade with several experimental test setups being established world-wide in pursuit of this goal. 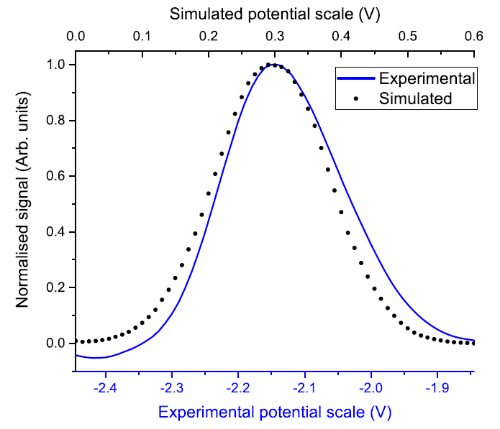 This paper focuses on one experiment at Daresbury Laboratory called TESS which was designed by ASTeC to measure the transverse energy with a view of measuring the longitudinal energy distribution by changing the potentials applied to parts of the system. This work formed part of Dr Lee Devlin's PhD thesis. During this time, Lee designed and wrote an algorithm which simulates the motion of electrons through the experiment and thereby assess whether what is measured is what we think we are measuring. What this work shows is that TESS really can measure the longitudinal energy distribution despite being designed to measure the transverse energy distribution. This is highly beneficial as it means that the cathode doesn't have to be moved from one experiment to another which risks spoiling the material and furthermore, it is a more compact solution than those being used elsewhere which means it can realistically be located next to an accelerator, so a photocathode is better characterised before being installed. The next steps will be to take the work presented in this paper and apply what has been learned to assess photocathodes destined to be installed at accelerators such as VELA/CLARA or any other electron accelerator.