PhD student and QUASAR member James Hunt has published his first paper entitled “Emittance measurements in low energy ion storage rings” in Nuclear Instruments and Methods in Physics Research (NIM-A). The article provides an in depth description of a new method for measuring the emittance of particle beams in the presence of several complicating factors, and is supported with detailed beam simulations.

Beam emittance is a very important quantity for accelerator physicists as it gives a measure of beam quality. The new technique is based on “beam scraping” which works by moving metal plates into the path of a particle beam and measuring the resultant particle “showers” as the beam is destroyed. Although this technique is already in use in accelerator facilities all over the world, a new approach of combining pairs of measurements and analysing them simultaneously will allow scientists to obtain more detailed information on the beam. This will help to understand the complicated beam dynamics processes at work within particle beams. Additionally, several previously problematic factors such as beam dispersion and unusual beam profile distributions may be dealt with by employing the new algorithm. 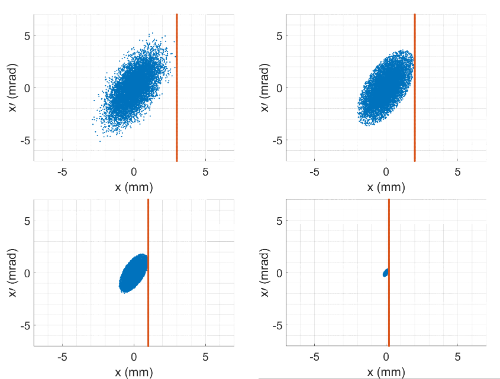 Horizontal phase space at different scraper measurement stages for an on-momentum Gaussian beam. The red line indicates the position of the scraper blade.

The new technique is shown to work for antiproton beams in simulations of the new ELENA (Extra Low ENergy Antimatter) ring which is currently under commissioning at CERN. The ELENA facility will provide lower energy and better quality beams to the antimatter experiments at CERN, and allow for a deeper understanding of nature and the universe itself. James will spend two weeks working on location with ELENA later this month, using the new algorithms to obtain emittance measurements and support the work presented in his article.

The paper may be found here: