One short trip for us, a giant LEAP for antimatter

Two years after the previous conference in Kanazawa (Japan), the 13th Low Energy Antiproton Physics (LEAP) Conference was held from March 12th to 16th in the brand new Conference Center of the Campus of University Pierre and Marie Curie, part of the historic Sorbonne University of Paris.

The LEAP conference has been held every two to three years since 1990 to discuss the latest findings and exchange information in interdisciplinary fields studying low energy antiprotons. LEAP actively stimulates dialogue between overlapping research fronts in the diversified field of antiproton physics and related fields involving mesons, baryons and strangeness. 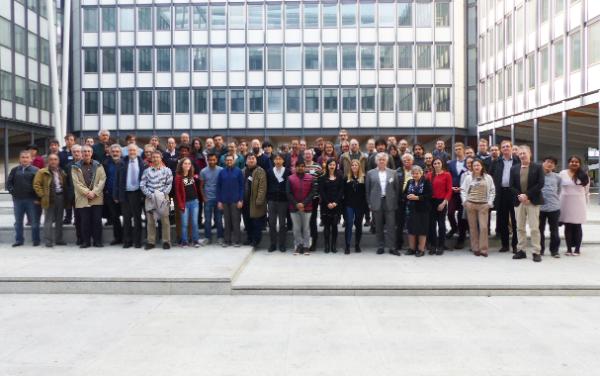 Members of the QUASAR Group attended this year’s conference, including Bruno Galante and Miguel Fernandes from CERN, and Bianca Veglia, Milena Vujanovic, Volodymyr Rodin and Prof Carsten Welsch from the Cockcroft Institute.

The field of low energy antiproton physics has made remarkable advances recently. The number of collaborations and scientists participating in various antiproton and antihydrogen physics experiments at CERN’s Antiproton Decelerator have increased, enhanced by the Extra Low ENergy Antiproton ring (ELENA) expected to be in full operation this year. In addition, studies of proton-antiproton annihilations leading to exotic hadrons offer a new perspective of understanding the dynamics of strong interaction and hadronic matter. Exciting developments are predicted in searches for antimatter in the Universe and the question of how antimatter behaves under gravitational fields is approaching an answer. The upcoming Facility for Low-Energy Antiproton and Ion Research (FLAIR) as part of the FAIR project will also provide new opportunities for antiproton experiments.

The scientific program consisted of invited and contributed talks. The conference began with alternative theories about the creation of the universe and the role of antimatter in this process. The progress and future prospects for ELENA and FLAIR were presented to the antimatter community at the end of the first day. After reviewing the theoretical prospects, the recent news about upgrades of each experiment in the AD-ELENA hall were presented, including remarkable improvements on the antiproton traps, spectroscopy techniques and detectors to significantly increase the precision of the measurements. 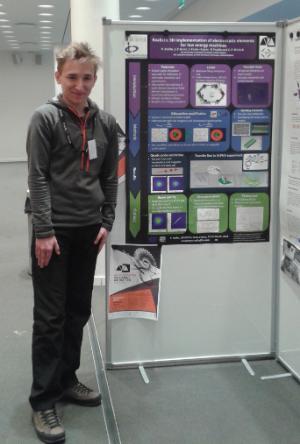 Volodymyr Roding at the poster session.

A poster session complemented talks about each experiment, describing the latest experimental result more widely. The QUASARs presented posters about their research on beam dynamics studies of ELENA, engaging in discussions and useful exchange of information.

In addition to presenting results at the poster session, Quasars attending the LEAP conference took the opportunity to meet with collaborators, other researchers from the field of antimatter physics and to establish new contacts for future research projects. Notwithstanding the intense scientific programme, breaks were used to exchange ideas, discuss talks and to arrange social events after the conference days’ end.

The next LEAP conference will be held in August 2020 at Berkeley, California. See you then!