Light sabres, hyper speed and droids – will they be made possible with the latest accelerator research? With the imminent launch of “The Last Jedi”, Professor Carsten Welsch, QUASAR Group leader, has explored the “Physics of Star Wars” in an event on 27th November designed to introduce cutting-edge accelerator science to hundreds of secondary school children, undergraduate and PhD students, as well as university staff.

“A short scene from Star Wars was just the introduction, the appetizer, to make the participants curious, but then I linked what I had just shown in the film to ongoing research here in our department.”

“In the very first movie from 1977, the rebels have used proton torpedoes that make the Death Star explode as their lasers wouldn’t penetrate the shields. I linked that to our use of ‘proton torpedoes’ in cancer therapy. Within our pan-European OMA project we are using proton beams to target something that is hidden very deep inside the body and very difficult to target and destroy.

“For the lightsabre, there is a link to advances in lasers and laser acceleration being studied by an international collaboration within the EuPRAXIA project. This programme is developing the world’s first plasma accelerator with industry beam quality. It uses a high intensity laser pulse to drive an electron beam and accelerate this to high energies. Applications in science or industry for advanced lasers include for example an advanced form of 3D printing for metals.”

“The light and dark side of the Force in Star Wars was an ideal opportunity to talk about matter and antimatter interactions which we are exploring in our brand-new research network AVA.”

“Making the kind of intelligent droids featured in Star Wars such as R2D2 and C-3PO requires a huge amount of data and the ability to analyse it. We have just launched the LIVDAT big data science centre for doctoral training which includes a machine-learning strand. For this we task machines to respond to change by looking at the data and finding their own approach. So again, there is a link that you can create quite easily between the cutting-edge research we are doing and the famous movies.” 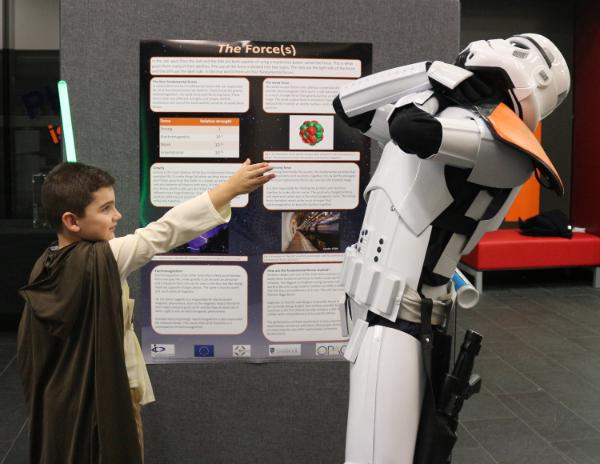 After the lecture, all participants were given the opportunity to understand the science behind Star Wars through numerous hands-on activities in our award-winning Central Teaching Laboratory. This included laser gravity, augmented reality experiments, and even a full-scale planetarium which will immersed participants into the world of Star Wars.

Professor Welsch and many QUASARs who joined him on the day had the kind permission of Lucasfilm to use film excerpts; these were complemented by Lego Star Wars models, a real cantina as found in the movie, storm troopers and even Darth Vader himself!

BBC Radio Merseyside (from 1:26:11), the Warrington Guardian and Physics World have already reported about the event which has brought the QUASAR Group to the attention of several hundreds of thousands. Even the BBC’s Science Focus website has published a whole feature article about the event. Many photographs from the exciting day can be found on Twitter at https://twitter.com/livuniphysics (#physicsofstarwars).

Many thanks to all who have helped make this fantastic event possible!