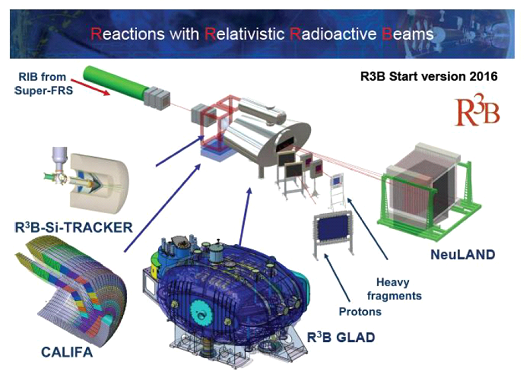 The high-energy, intense, radioactive ion beams which will be available at the accelerator Facility for Antiproton and Ion Research (FAIR), currently under construction in Darmstadt, Germany, provide exciting and unique new opportunities to study extremely exotic atomic nuclei and nuclear matter. In addition to their contributions in fundamental Physics, such studies have enormous impact on astrophysics, from the evolution of the early Universe to the structure of neutron stars for instance.

The large R3B international collaboration (~300 Nuclear Physicists from 83 institutes around the world) is currently designing an experiment which will exploit the FAIR radioactive beams of high intensity and purity that will be available with incident energies up to around 1 GeV per nucleon, the highest energies worldwide for such ion beams. This will allow the investigations of isospin asymmetric nuclear matter using, for example, proton elastic scattering, quasifree scattering and heavy-ion collisions.

Understanding the nature of nucleon-nucleon correlations (short-range and tensor or long-range correlations) beyond the mean-field level in isospin asymmetric nuclei and nuclear matter is a fundamental issue in nuclear physics today. The modification of these correlations as a function of the density, temperature and isospin asymmetry of the nuclear medium will determine the nature of many-body systems as diverse as finite atomic nuclei, extended nuclear matter and compact astrophysical objects such as neutron stars. Theoretically, it remains a very challenging problem to incorporate such correlations in the nuclear many-body system starting from the bare nucleon-nucleon interaction and experimental studies are therefore very important.

The R3B collaboration, of which the University of Liverpool is a leading member, is currently building a versatile experimental setup with high efficiency, acceptance, and resolution for kinematically complete measurements of nuclear reactions with the high-energy radioactive beams of FAIR. The experimental setup will be located at the focal plane of the high-energy branch of the new fragment separator, also under construction, the Super-FRS, and will be suitable for a wide class of experiments, including heavy-ion induced electromagnetic excitation, knockout and breakup reactions, light-ion (in)elastic and quasi-free scattering in inverse kinematics, as well as fission, spallation and fragmentation reactions, thus enabling a broad physics programme with rare-isotope beams to be performed.

In 2010 STFC awarded ~5.5 M£ to a consortium of UK Universities (Birmingham, Edinburgh, Liverpool, Surrey) and STFC Daresbury Laboratory for the R3B Silicon Tracker Project as part of the NUSTAR Project (about 8M£ in total). The state-of-the-art R3B Tracker is being constructed in the Liverpool Semiconductor Detector Centre and benefits also from the Mechanical Workshop and Advanced Materials Laboratory, all run by the Department of Physics in the Oliver Lodge Laboratory. It consists of three layers of Silicon microstrip sensors, with 100 micron thickness for the inner layer and 300 micron thickness for the two outer layers. All sensors are double sided with a stereoscopic strip pattern and a 50 micron pitch resulting in 120,000 channels in total. The R3B Tracker is now in its final prototyping phase in the Liverpool Semiconductor Detector Centre. The sensors are being produced by Micron Semiconductors Ltd. The new ASIC chip and custom made readout electronics are being produced and tested by STFC Daresbury and Rutherford Laboratories, in collaboration with the University of Liverpool. 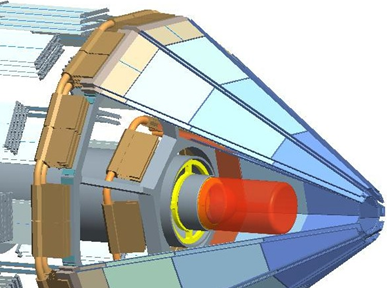