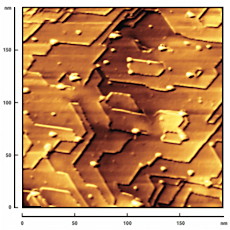 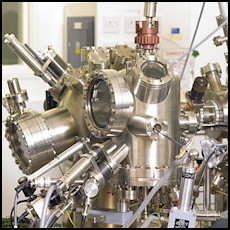 In the decades since its initial release in 1994, the number of disciplines in which scanning microscopy has played a significant role has increased dramatically. Thus the development of analysis algorithms and improvements to the software that were concomitant with the expansion of the scanning microscopy facilities of the Surface Science Research Centre throughout the late 1990s naturally found applications in disciplines more diverse than just within the physical sciences.

One of the advantages of Image SXM compared to the software supplied by manufacturers of scanning microscope systems is that it can display images from a number of different manufacturers — if a laboratory has more than one scanning microscope system, which is becoming increasingly common, then the ability to compare images obtained from different systems is very important. Collaborations with researchers using many types of scanning microscopes led to the support for 50 different SXM image file formats (plus 20 non-SXM file formats that various researchers have found to be useful).

Further applications of image analysis techniques were developed and incorporated into the framework of Image SXM. In addition to the software developments that targeted scanning microscopy, many of the image processing and analysis routines that were integrated into Image SXM were of more generic use. Despite the fact that some of these new developments had no particular relevance to scanning microscopy, the title of the software was by this time well established and so it was decided not to attempt to re-brand it. Many of the applications could still be described as microscopy in one sense or another, but some were quite distinct, such as the analysis of electron diffraction patterns (with images acquired from digital cameras) or the Earth's ocean currents (with images acquired from satellites).

Image SXM is used in laboratories throughout the world. Analysis of the most recent usage statistics available (eg, web page hits, emails, ftp downloads) revealed that it was in use in 10,000 departments in 3000 institutions in 90 countries, with the majority of users in Europe (30%), USA (30%) and Japan (15%).

A breakdown of usage by discipline, partly from the internet statistics and partly from direct feedback from users, indicates that most users identify themselves as working in medicine (25%), physics (20%), biology (15%), chemistry (15%), engineering (10%), geosciences (10%) or materials science (5%). Many users work in interdisciplinary fields, but this has been simplified for the purposes of presenting the statistics.

The Image SXM application is downloaded by users in universities, research institutes, medical centres and hospitals at a rate of 4,000 downloads every year. The total number of downloads since January 2008 is > 22,000 (and is estimated to be > 50,000 since its first public release). 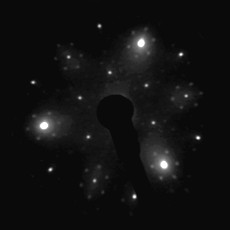 For an example of how the automated LEED I-V data extraction routines of Image SXM have been used, see J. Chem. Phys. 123 (2005). 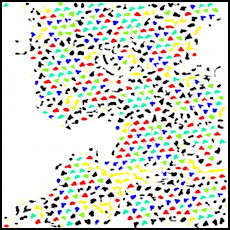 Complex molecules can adsorb onto surfaces with various orientations, depending upon the details of the interactions between one molecule and another and between the molecules and the surface atoms.

Scanning Tunnelling Microscope (STM) images of the molecules may have the spatial resolution to distinguish different molecular orientations, but rapid analysis of the populations of all the possible orientations requires a customised image analysis algorithm. For an example of how such analysis was used, see the paper on the mapping of complex chiral adlayers published in J. Phys. Chem. C 115 (2011). 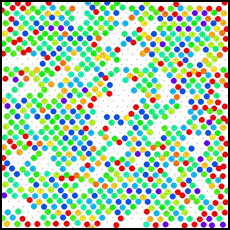 The registration of molecules on a surface with respect to the underlying crystal substrate is an important property as it determines the nature of the atomic interactions, and hence the bonding, of the molecules. Fourier techniques can be used to extract the periodicity of the crystalline substrate and identify the locations of the adsorbate molecules with respect to the resultant grid pattern. 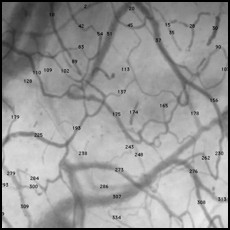 Microscopy Image Analysis Software for Medical Applications (MIASMA) is the collective name for a number of collaborative projects with medics. Although Image SXM was written for scanning microscopy applications, it has proved to be an excellent platform on which to develop specialist image analysis solutions for the specific needs of users, including those who obtain images from light microscopes.

MIASMA is the result of a number of these specialist applications having some common ground and so benefiting from being considered as part of a larger, overarching project. A number of MIASMA projects are described under Biophysics and on a separate MIASMA web page. 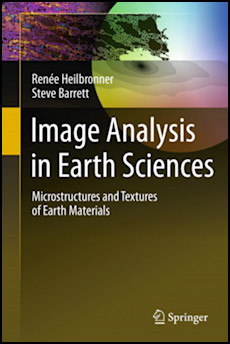 Principles of CIP Image Analysis (PrinCIPia) is an application that handles the calculation, display, analysis and manipulation of images representing the crystallographic orientation of grains in rock samples imaged by a polarising microscope. It is a customised version of Image SXM that was developed in collaboration with Professor Renée Heilbronner at the University of Basel.

The book Image Analysis in Earth Sciences by Heilbronner and Barrett summarises the application of all of the image analysis concepts and algorithms embedded in Image SXM to the quantitative analysis of the crystallographic orientation and texture of rock samples.