Sudharsan graduated as a mechanical engineer from National Institute of Technology, Raipur, India in the year 2011. During his bachelor's studies, he worked at Indira Gandhi Centre for Atomic Research (IGCAR), India under Indian National Academy of Engineering (INAE) summer fellowship on artificial neural network modelling of welding joints.

After obtaining his bachelor’s degree, Sudharsan worked at Coal India Limited as an assistant manager for two years. In 2013, he started his master’s studies in nuclear applications at the University of Applied Science Aachen, Germany. His master thesis project was carried out at the Institute for Nuclear Physics, Forschungszentrum Juelich, Germany. His study focused on fundamentals of nuclear physics and detector technology with the emphasis on medical applications. The work was to design and construct an automated test bench to calibrate beam position monitors (BPMs) for the HESR in Darmstadt. In 2016, Sudharsan graduated with a master’s degree specialized in medical physics.

In January 2017 Sudharsan joined the OMA project at Paul Scherrer Institute. His project focuses on developing a sensitive RF based current monitor for non-destructive beam current measurements at very low beam intensities. Emphasis will also be placed on the possibility to measure beam position. 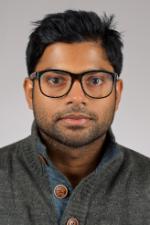