Anna Vnuchenko obtained her Master’s degree in Physics from the University of Paris-Saclay, France in 2016. She completed a multidisciplinary program with a specialization in large facilities. Anna also holds a degree from the department of physics and mathematics of the National Teachers’ Training University in Ukraine. She has work experience from the department of nuclear and physical research in IAP-NASU, where she took an active part in design, installation and commissioning of an automated goniometer on nuclear recoil end-station of the accelerator-based facility, to study the radiation damage produced due to ion implantation. Apart from accelerator physics other areas of research included fundamental investigations of interaction processes of MeV ions with matter by means of HRBS and HERDA techniques.

Anna joined the OMA network to work on the application of high gradient RF technology for hadron therapy accelerators, a project hosted by CSIC/IFIC. 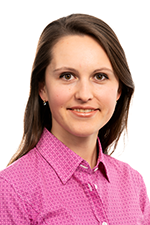