Anna Baratto Roldán studied Physics at the University of Trieste in Italy. Following the completion of her Bachelor’s degree in 2013, she enrolled in the MSc course of Nuclear and Subnuclear physics at the University of Trieste, choosing medical Medical Physics as her main subject. During her studies she developed a keen interest in the fields of charged particle therapy and radiobiology.

Anna carried out her Master’s thesis within a cooperation program between the University of Trieste and the INFN Section of Milan, and obtained her Master’s degree in March 2016. For her thesis project, she worked on the measurement and analysis of charged secondary particles emitted by oxygen beams impinging on a PMMA target. The project was part of a larger experiment, held at the Heidelberg Ion Beam Therapy centre, which aimed to develop new real-time monitoring techniques for Charged Particle Therapy.

In November 2016, Anna joined the OMA project at University of Seville and CNA, where she will work on realization of a system for irradiation of cell samples at the cyclotron installed at CNA. In order to do so, she will perform dosimetry studies outside and in the region of the Bragg peak, as well as develop Monte Carlo tools for the calculation of proton relative biological effectiveness (RBE). 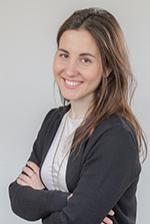