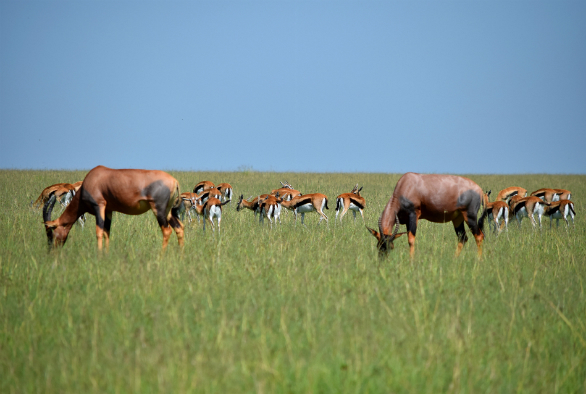 Many animals live in a world characterised by a bewildering array of signals from other species. But to what extent are individuals able to extract useful information from these signals?

In a new study, scientists from the University of Liverpool and the University of York, led by Dr Jakob Bro-Jørgensen, have, for the first time, tested the responses of African savanna herbivores to the alarm calls of their neighbours across the whole community. The findings reveal new insight into the adaptive and non-adaptive processes that shape this response.

Ecologist Dr Kristine Meise, from the University’s Institute of Integrative Biology, explains: “Animals often obtain information about the presence of predators from the alarm calls of other members of the same species. Although this idea is well documented and understood, little is known about how animals process other species’ alarm calls.

“Eavesdropping on other species’ alarm calls can provide them with crucial survival benefits as it increases the chances to detect and thus, to escape a predator. However, not all alarms are equally meaningful as species differ in their predator vulnerability. For example, cheetahs regularly attack gazelles, but not giraffes or buffaloes.”

To better understand this complex ‘alarm system’ the researchers conducted a field study at the Masai Mara National Reserve, Kenya, focusing on 12 of the most common species in the herbivore community, including zebras, buffalo and giraffes.

The team conducted censuses on three study plains, covering a total area of 54km, to determine the relative abundance of the study species.  Then, to establish the probability with which species-specific alarm calls denoted the various predators they conducted a predator simulation experiment by exposing the study species to life-sized photographs of their five main predators, including lions and cheetahs.

Analysing the data, the researchers found that herbivores showed the strongest response to alarm calls from species which are vulnerable to similar predators. However, they also found an independent effect of acoustic similarity, with species responding more strongly to alarm calls that sound similar to their own.

Dr Meise said: “Our findings reveal that the alarm communication network of savanna herbivores is the outcome of multiple adaptive and non-adaptive forces acting simultaneously.

“Behavioural ecological research generally focuses on interactions between individuals of the same species, but alarm communication networks between different species have the potential to shape the structure of natural communities and influence ecological processes.  Our study provides valuable new insight into this little understood area of research.”

The study, published in Proceedings of the Royal Society B, was supported by National Environmental Research Council.