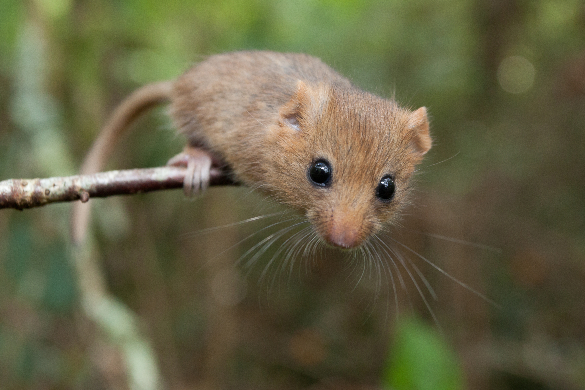 A new mapping tool developed by researchers at the University of Liverpool could help support UK-wide efforts to reintroduce the threatened hazel dormouse.

Immortalised as a well-loved sleepy character in Alice in Wonderland, this nocturnal species spends most of its waking time climbing among woodland tree branches in search of food. However, their numbers have fallen in the UK by 51% since 2000 due to habitat loss and fragmentation.

A large-scale UK reintroduction programme was launched by the People’s Trust for Endangered Species (PTES) in 1993, which has so far released more than 1000 captive-bred hazel dormouse into the wild.

Identifying suitable woodland release sites is vital to the long-term success of this programme, and a new habitat suitability map for dormice in England developed by Liverpool researchers could help support future release site decisions.

Natural populations of dormice were once found across northern England and many reintroduction sites are focused on these areas. Perhaps unsurprisingly, the researchers found that suitable habitat in the north of England is more infrequent and disjointed than southern England, where there are still natural populations of dormice in existence. Importantly however, the map reveals that there is still potential to find suitable habitat for reintroductions in the north.

Masters student Melanie Baker, who co-led the work, said: “Despite long-term conservation efforts, natural hazel dormouse populations are still declining in the UK. Our mapping approach has identified regions across England that are likely to contain broadly suitable habitats for hazel dormice. While potential sites identified by habitat suitability maps should be used alongside expert opinion and on-the-ground checks to ensure the site is appropriate for reintroduction, we believe they offer a valuable tool to conservationists.”

To develop the habitat suitability map, the researchers undertook a habitat analysis of sites where natural hazel dormouse populations are present in England to identify specific characteristics that these habitats all share. They then used dormouse monitoring data from the reintroduction programme to confirm that these habitat ‘descriptors’ can strongly influence the number of animals present in nest boxes.

Using a range of open-source maps and ecological modelling techniques, the team were then able to create a map showing areas of potentially suitable habitat in England. Finally, using the county of Cheshire as an example, they demonstrated the practical application of their map as a tool to help prioritise the most appropriate sites for future reintroductions.

Although demonstrated for the hazel dormouse, the researchers say this approach to reintroduction site selection could be beneficial to a broad range of species.

PhD student Emma Cartledge, who co-led the study, said: “Our study focused on the importance of habitat for reintroduction site selection, however we also found that longitude strongly influenced the number of dormice found in nest boxes at reintroduction sites. This could be due to climate differences across the country and something which will be very important to investigate considering potential impacts of climate change on hibernating species.”

The study was led by researchers from the University’s Mammalian Behaviour and Evolution research group in collaboration with the PTES and Cheshire Wildlife Trust and has been published in the journal Conservation Science and Practice.