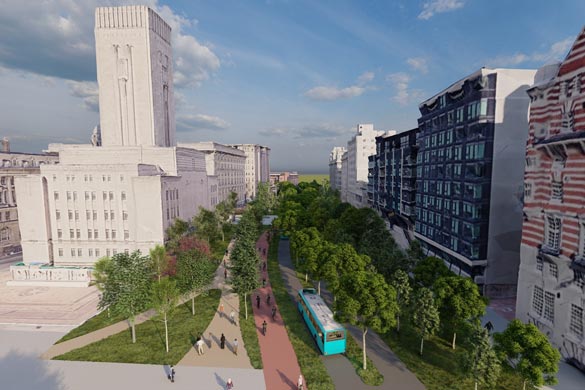 Town and Regional Planning student Todd Lithgow has been creating new designs for crucial parts of the city that would transform the city centre - with a key idea of improving space for walking and cycling and making the city's roadworks safer and greener.

Todd recently met with Liverpool Mayor Joanne Anderson to share his ideas in person, including a reimagined version of The Strand as well as Princes Avenue in Toxteth and the busy Parliament Square junction near the Baltic Triangle.

How did this come about?

I have always been a bit of a perfectionist! Sometimes I look at certain places in the city and think, how could this be better? Generally, I am thinking about this from an Urban Planning perspective, and while not every planner is the same, I think many share my aspirations for safer, healthier and happier public spaces that people want to spend time in.

Many planners, and increasingly the general public are starting to come to the terms with the fact that for the last half-century, we have only really considered how spaces work for people driving vehicles, and so we have ended up with spaces that feel like places vehicles belong, but people feel out of place, or pushed out to the sides on narrow and crowded pavements.

Tell us more about the designs for the city centre. What improvements they would bring?

There are several places I have looked at, but generally the approach is the same. Most of these places feel like they're only for vehicles, even if there isn't much traffic. With my designs I try to give everybody space, and where possible, add as much greenery as possible. I've focused a lot of my attention on cycling - it's not really seen as a viable mode of transport by most people - and that's exactly because there is no space provided on most streets to enable it. ­There are thousands of people in the Liverpool City Region that would happily cycle if they felt safe. 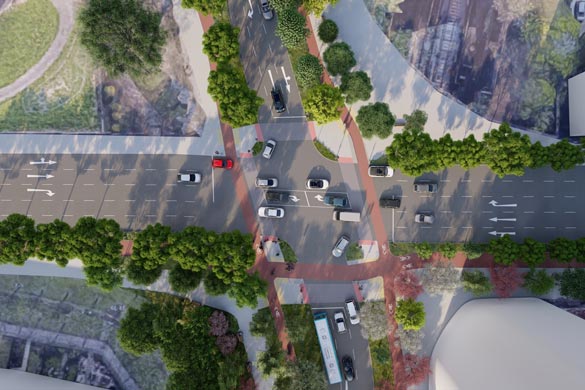 I hope that my designs, based on the best practices that are seen in the Netherlands would enable more people to cycle, improving health and wellbeing, while also making other people's lives better by reducing congestion, air and noise pollution, and moving in a way that is more engaging with other people and local businesses.

It's hard to imagine how somewhere could be different. And with my designs, it is mostly the case that 'it could look like this tomorrow', though some, such as my design for the Strand, are definitely more aspirational. Either way, I'm not trying to show people "this is how it has to look", but to give them an alternative vision that they can imagine. It definitely starts a conversation, as I have learned myself by being invited to speak with the Mayor.

What have you gained from the project?

I am happy to say that the reception is generally very positive. Even those who might not agree entirely can at least see the motivation behind my ideas. Since started doing the designs last year, I've been able to work on a few projects that staff in the Geography and Planning department at the University were working on, which was a great experience and helped me to hone my skills.

What did Mayor Anderson think of your designs and are there any plans for implementing them/being involved in future developments?

The Mayor was very open to my ideas. The council do appear to be making some strides, such as the recent implementing segregated cycle lanes on Kingsley Road. This is something that benefits me on my own commute to university! 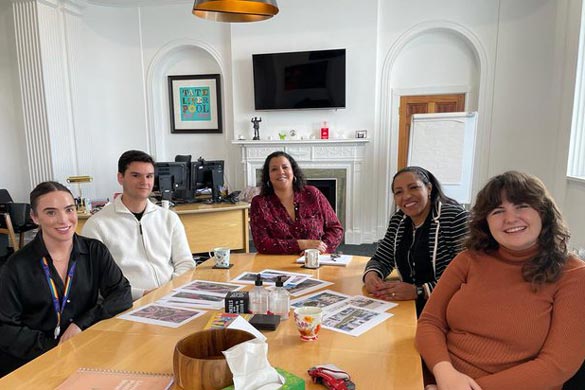 They recognised some of the specific issues I had, such as the lack of a safe and comfortable way to cycle between Princes Park and Princes Boulevard, something my roundabout re-design aims to fix. Also the lack of greenery on the Strand, something I took to the extreme with my proposal. They agreed with me that the aspiration needs to be for a 'network' of cycling infrastructure. A single route won't cut it. It will take time, but it's better to start today than tomorrow.

What are your plans for the future after graduation?

To be honest I'm still not sure! I love urban design and doing work about rethinking streets and public spaces and so would be very happy to work in this kind of environment, but at the same time there are many other aspects of Urban Planning I am equally interested in.

We have a long way to go to improve urban planning in this country I think, not just with how we arrange the space in our cities and towns, but with public transport, creating new places for people to live, work and play, addressing the stark inequalities between different regions or even neighbourhoods in the same city, how we engage the public and, how we manage all this against a backdrop of climate change, a pandemic, economic issues and changing demographics.

I think as long as I am working in some form to face up to the challenges we face, I will feel like I am doing something worthwhile. Planning is such a diverse field, and it can be quite hard to decide what to specialise in!