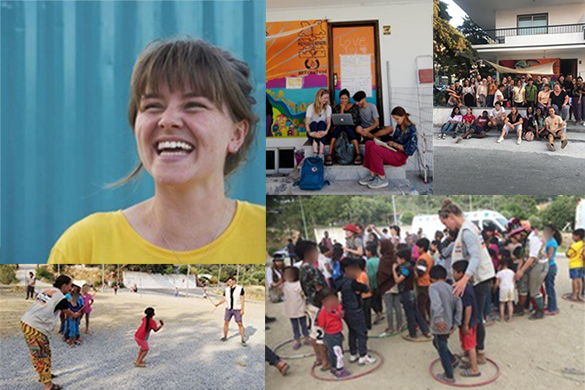 Anna Self, who graduated with a BA Geography degree in 2018, reflects on her recent experiences of working with refugees in Greece, and how her studies at Liverpool helped to prepare her for the work she did there.

"It’s been a little over a year since I graduated from the University of Liverpool and I have just returned from Samos, Greece where I’ve been working in a refugee camp, home to 4,500 people. I have thought a lot about how I want to communicate with people back in the UK regarding what is happening in Samos. Some people have asked me if I’ve had a ‘good time’, or if I ‘enjoyed myself’ and honestly, I can’t answer that question. The situation in Samos, a small island not too far from Turkey, is appalling. I think we are failing humanity by letting people live in the conditions that I have seen.

"I’d like to think that the majority of my friends and family are aware and sympathetic about the refugee crisis we face in Europe, however many people are not. My experiences have made it clear to me that the conversation about refugees' treatment needs to be had. It might be difficult and uncomfortable, but one thing I’ve learnt is that ignorance is one of the biggest culprits in this situation.

"Tourists in Samos are blissfully unaware of the 4,500 people living in inhumane conditions less than 500 metres from the city centre. These lovely, innocent, hard-working people are living in tents, without access to toilets, showers, and basic amenities. I’ve seen people digging through rubbish looking for food, children sleeping next to rats, and even women who have been discharged from hospital one day after giving birth, having to return to a one-man tent that is more suitable for Glastonbury than it is for caring for a newborn baby.

"I believe we have a responsibility to these people – many of whom come from countries Britain either colonised or in which we have contributed significantly to the conflict. I’ve had uncomfortable conversations with people from Ghana and Sudan who recognise that although colonisation ended decades ago we are all still living with its consequences.

I am constantly inspired by people's compassion and drive to help strangers, friends, and neighbours, despite the hardship they are going through themselves.

"Greece is attempting to deal with the huge pressures of this migration, but we can help share the burden. Write to your local councillor, your MP, talk to your friends, start the conversation. Next time you catch yourself complaining about a delayed flight or an overpriced flat think of the woman and her newborn baby living in a tent with no healthcare or government to support them. The media might not be talking about it anymore, but the refugee crisis is still happening, and the situation is only getting worse.

"Having studied Geography at Liverpool, I have been able to assess the situation in Greece with a unique lens. During my studies, I learnt about Europe's responsibility towards the state of affairs in many countries across the globe and how we can help to alleviate tensions in future.

"Over the last few months, I’ve been lucky enough to work with hundreds of individuals who come from all over the world, many who were refugees themselves. I am constantly inspired by people's compassion and drive to help strangers, friends, and neighbours, despite the hardship they are going through themselves."

To find out more about Anna's work and how to get involved you can contact her via email at  annaself13@outlook.com.